I heard something sounding like ucipital mapilary when I was watching on channel 5 this evening Dracula: Dead and Loving It, a horror spoof in which a clumsy, accident-prone incarnation of Bram Stoker's famous vampire count left Transylvania for London in pursuit of a young Englishwoman. Having not a clue about what the term really means, I did some research.

In the end I found out that ucipital mapilary is the suprasternal notch (or in Latin lacuna suprasternalis), the visible, little indentation between clavicles (collarbones, the pair of bones joining the breastbone to the shoulder blades), which is regarded as the mark of true beauty.

If you are by any chance a medical student, doctor, anatomist or sort of forensic expert, don't tell me there is no such term in Gray's Anatomy, because it's actually a fictional term coined by the screenwriter Samson Raphaelson for the 1941 Hitchcock thriller Suspicion, in which an exchange between Johnnie Aysgarth (Cary Grant) and Lina McLaidlaw Aysgarth (Joan Fontaine) went:

Johnnie: Don't do that.
Lina: Why not?
Johnnie: Because your ucipital mapilary is quite beautiful. 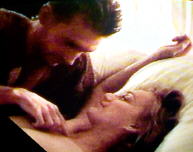 I claim this shoulder blade. No, wait. I want – turn over – I want this, this, this place. I love this place. What's it called? This is mine. I'm going to ask the King permission to call it the Almásy Bosporus.

'This place' is indeed ucipital mapilary.
Posted by Wei at 04:45

I was looking for an explanation of this "ucipital mapilary" and I found this.

I just turned from tv to computer after hearing Leslie Nielsen say the same... and I'm overjoyed to see I'm not the only one.
Thanks Principal Wei!

I was watching the movie and decided to search for "ucipital mapilary".. And ended up here.. thanks for explanation..
Entrepreneur Ideas