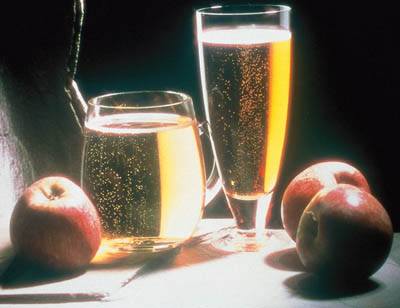 Recently I found cider quite a good substitute for beer if a short break from bitterness of hops is what you desire. By cider, certainly I mean the alcoholic one.

If you consult a dictionary, you'll probably find that cider refers to either an unfermented beverage or an alcoholic drink made by crushing fruit, typically apples. That's true, as in the States the alcoholic one is known as hard cider while the fresh, minimally processed apple juice is called cider or apple cider. Nevertheless, people in Britain never get confused. Wherever you ask for cider, you never get apple juice. Cider is definitely an alcoholic drink here.

Cider is very popular in Britain, particularly in South West England. Although, together with perry, a similar drink made from fermented pear juice, it accounts for only 6.4% of UK alcohol consumption, far behind beer (44.3%) and wine (27.1%), the UK has the highest per capita consumption and the largest cider producing companies in the world, according to NACM (the National Association of Cider Makers).

Cider usually has a stronger alcoholic content than beer, most of the time over 5%, although its alcoholic strength does vary from 1.2% to just under 8.5%; however, because the British government tax cider at a lower rate, in the UK it's always cheaper than beer in terms of price per volume.

Cider is the oldest alcoholic drink produced in the Britain. People once believed that it was brought in after the Norman Conquest of England in 1066, but it is now thought to have been introduced to the early Britons by some peoples who roamed over the areas in modern Spain and Northern France with their shekar, a Hebrew-origined word for an intoxicating liquor distilled from corn, honey or dates. 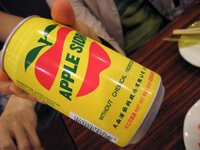 I have to admit that before I came to Britain, I had never tried the alcoholic cider. The only thing similar to it I knew was apple sidra, which has nothing to do with Gulf of Sidra, a broad inlet of the Mediterranean Sea on the coast of Libya, but is just a popular non-alcoholic fizzy beverage produced in Taiwan, probably something Westerners would call apple soda. The manufacturer chose the word sidra (indeed 'cider' in Spanish) for the product to suggest that although people would never get intoxicated when having apple sidra, they would still enjoy the sour-and-sweet tang of cider in it. (Image from this blog)

Although sometimes I take cider as an substitute for beer for economic reason, it does remind me of my motherland Taiwan, where I used to drink apple sidra as I've never get along with coke.
Posted by Wei at 22:18