Broccoli is a plant, a variety of the cabbage family, which bears large immature flowerheads composed of numerous small green flower buds. The fleshy flowerheads sprout from a chunky, edible stalk and form a mass resembling a tree crown.

Under the International Code of Nomenclature for Cultivated Plants (ICNPC), broccoli is classified as the Italica Cultivar Group of the species Brassica oleracea. The word 'broccoli' is from Italian; it's the plural form of broccolo, which means cabbage sprout, head. According to Oxford English Dictionary, the first use of this word in English may date back to 1699 in Evelyn's Acetaria, where 'The Broccoli from Naples' is mentioned.

Broccoli has a close relative: cauliflower. Everybody here in Scotland, in Britain, probably in Europe or in the entire Occident, knows that broccoli and cauliflower are indisputably two different words for two different veggies; however, in Taiwan these two edible plants are both called hua ye cai, or sometimes simply hua cai (literally 'floral vegetable'), and only when necessary would a colour adjective be added before it to indicate whether a green one (broccoli) or a white one (cauliflower) is being referred to.

My fiancée and I have a liking for broccoli because of the perfectly mixed physical sensation in the mouth produced by its crispy stalks and pulpy flowerheads. We just don't understand why some American children always show a groundless fear for this ambrosial veggie.

However, I never thought that broccoli would become part of endless nightmares. Though it's still one of my favourite vegetables, a hauntingly poetic relationship between me and broccoli has developed since I had my first broccoli dream in January 2005.

My fiancée came to visit me at Christmas in 2004 with her luggage full of presents for me, but, much to my surprise, what she asked for in return was a just tasty Scottish broccoli. Therefore we went to Marks & Spencer to get one.

As it started snowing heavily immediately after she made the request and we couldn't be bothered to walk all the way through the town centre to Tesco for a cheaper broccoli, we returned home with no broccoli.

It was a beautiful white Christmas eve, which was indeed unusual for it hadn't snow in Stirling at Christmas for a long while. However, my fiancée's wish didn't come true. Bing Crosby must have been turning in his grave had he heard of how I ruined this white Christmas.

She flew back to Taipei on Boxing Day.

A week later, I dreamt a dream, in which she took me to the court and appealed divorce, because I couldn't afford a broccoli. 'You pathetic bloke,' the judge roared, 'this woman has been waiting for you for ten years, and you wouldn't buy her a broccoli?' She won the case and divorced me.

What a nightmare. My 'wife', whom I've loved for ten years with every single inch of my heart, left me as a result of my failure of timely broccoli supply.

Another week later, I dreamt a sequel, in which I failed my PhD and moved to the Highlands to start my broccoli farm. I did so well and became the main broccoli provider in the British Isles.
It's still a nightmare, as I dreamt that I failed my doctoral study; nevertheless, there is a whiff of black comedy.

Still another week, I had the third broccoli dream so all of these became a trilogy. I was playing the piano in the broccoli field and making wholehearted wishes that my broccoli will grow well and sell at good price, just like those who play Mozart for milk cows in hopes of boosting milk productivity.

Though not as great as those Hollywood films, such as The Godfather or Star Wars, I always believe these broccoli visions have the potential to be adapted for TV drama.

Time flies; it's been more than one and a half years since the Broccoli Trilogy. This June, inspired by my friend Ellen and her seemingly unending low mood, I wrote a piece of music, 'Broccoli's Sorrow'. Despite the fact that this work was originally dedicated to Ellen and thus titled 'Ellen's Sorrow', dew to another broccoli hallucination, which I believe was caused by a fierce quarrel between me and my fiancée over the phone, I rename it Broccoli's Sorrow.

This time, I was running through my withered broccoli field to chase my fiancée on the horizon. Broccoli Trilogy has now become Broccoli Quadrilogy. 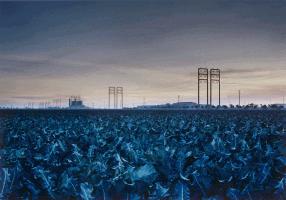 Anyway, I will definitely marry her next year. No more waiting. But I am still assessing if she should carry a broccoli bouquet while walking through the aisle.

For those who are interested in May's interpretation of this work, visit this (in Chinese).