The Broons and Oor Wullie 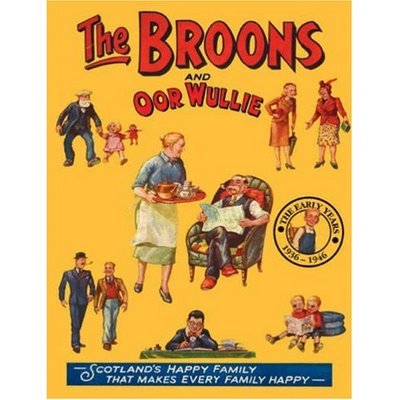 This afternoon I went to WHSmith to get a copy of The Scots Magazine, a must-read monthly for me to learn more about the land and the people, but ended up paying for a copy of The Broons and Oor Wullie, a collection of Scottish comic strips. Then I went for a pint of Best in Port Customs Bar, my favourite pub in Stirling where barmen or barmaids always remember my name and a pint is ready for me before I actually order.

Oor Wullie ('Our Willie' in the Scots language) and The Broons ('The Browns' in Scots) are both comic strips set in Scotland within The Sunday Post newspaper, which is published in Dundee by D C Thomson & Co Ltd and sets a model for written Scots and its spelling.

Although some linguists argue that Scots is an ancient dialect of English or the Anglic varieties spoken in parts of Scotland, Scottish people regard Scots as an autochthonous language (or in plain words, 'indigenous language') of Lowland Scotland, as opposed to Scottish Gaelic spoken by some in the Highlands and Islands.

In the pub, some regulars whom I am quite acquainted with came to me and asked if I understood what I was reading. Come on! I've been in Scotland for almost five years and spent some time learning the language of this country; of course I know some Scots. A lad picked up a line in the book:

Gran'maw's comin' tae stay wi' us, so ye must be a very guid laddie an' dae a'thing she tells ye!

Grandmother is coming to stay with us, so you must be a very good boy and do all the things she tells you!

(Listen to my demonstration!)

Ha ha ha, I happen to know it. It means

I'm going back to Taiwan a week Sunday for a five-week break. I would like to bring some copies of The Broons and Oor Wullie as Christmas gifts for my friends; however, it really worries me if they would ever understand Scots.
Posted by Wei at 08:09