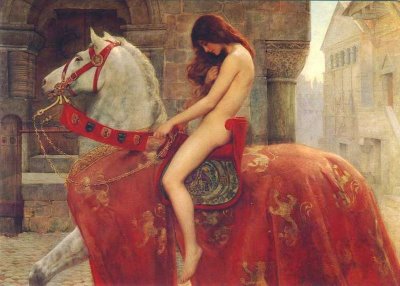 Godiva is a well known Belgium chocolate manufacturer established by the master chocolatier Joseph Draps in Brussels in 1926. It is named in honor of the legend of Lady Godiva (or in old English Godgifu or Godgyfu, which means 'gift of God'), an Anglo-Saxon noblewoman and wife of Leofric (968–1057), Earl of Mercia and Lord of Coventry. 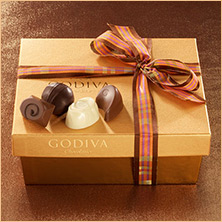 A historical legend behind luxurious chocolate?

According to folklore, in 1057 Lady Godiva appealed to Earl of Mercia for reducing cruel taxation imposed on the people of Coventry. Time and time again her husband refused, and in the end only granted her request, provided that she rode naked throughout the streets of Coventry. She agreed. After announcing that all the people of the town should stay indoors or shut windows, clothed only in her long hair, she rode through the midst of the town. The citizens of Coventry graciously stayed inside to spare their benefactor any feelings of shame. Godiva's husband kept his word and thus the people of Coventry were finally relieved of the weighty tax burden. Today we can see a statue of Lady Godiva in Coventry city centre in memory of her deed.

There was an incident. A tailor named Tom defied Lady Godiva's order. As a voyeur probably first recorded in history, he made a hole in the shutters to look out while Lady Godiva passed by on her nude ride, and was reportedly struck blind by a divine light the moment he saw her. He became known as Peeping Tom, and Peeping Tom later became a term referring to one who derives pleasure, usually sexual, from secretly spying on others. True or not, this definitely reminds us of what Confucius says: 'See no evil' (Fei li wu shi, literally 'look not at what is contrary to propriety').

Next time when you recieve or give a pack of Godiva, don't forget to tell your friend the legend of Lady Godiva.