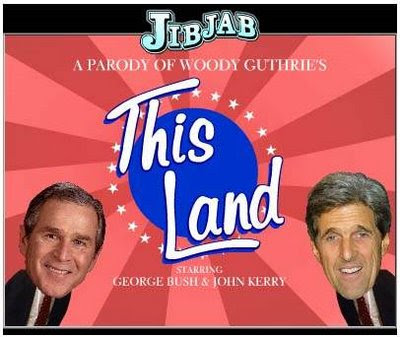 (Click the picture to watch the film)One among latest international headlines this week is that Donald Rumsfeld resigned as U.S. Secretary of Defence after the Republican Party lost control of both the House of Representatives and the Senate in the United States midterm elections.

Personally, I am not all agog at US politics, an arena full of business tycoons, lobbyists, opportunists, speculators and feigned patriots; nevertheless, I was once forced to pay heed to it when I did seminar teaching on an undergraduate course 'Media Impacts and Influences' at the 2004 autumn term. To introduce to students and facilitate more discussion on how the media may play during an election period, I have to keep an close eye on 2004 US presidential election. I happened to find a sarcastic short online and then ripped it to my hard drive so that I could show my students how some people would despise the so-called democracy in the States.

The US midterm elections did remind me of this. Have a look and enjoy.
Posted by Wei at 23:54