A patchwork of profile portraits 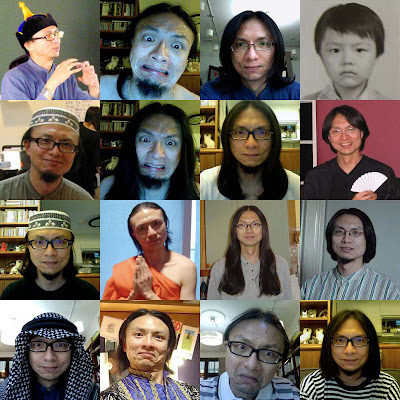 Since the introduction of online activities or services such as instant messaging, blogging or microblogging, social networking websites and so on, there has been a need to create profile pictures or display photos. People would usually either take a snapshot with the built-in camera on a laptop or carefully select a spiffy one from a pile of existing photos.

It seems to me that savvy internet surfers, or those who are au courant with the cyber scene, are obliged to change profile pictures, so much so that I would produce interesting personal portrait from time to time in order to have a wee change and keep up with the trends.

I cannot remember how many portraits I have made so far and for which sites or applications those images were prepared. However, I am able to assemble some of them into a patchwork. No matter how each individual segment look like, the whole canvas is not bad at all, isn’t it?
Posted by Wei at 17:12 No comments: Links to this post 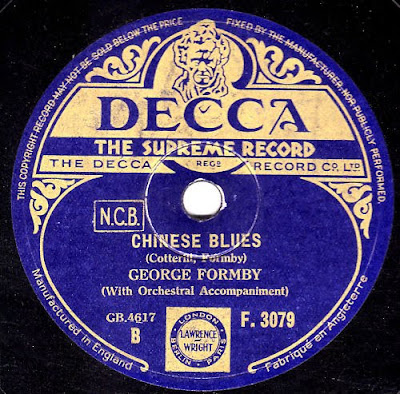 (Listen to 'Chinese Blues' by George Formby, to the accompaniment of the Jack Hylton Band, 1932)

It's common to see, especially in old films, the stereotype of East Asian immigrants in the States as owners of specific small business such as restaurants, groceries and laundries. These figures are usually part of backdrops but never part of main story lines. I don't really remember any film about, say, a Chinese grocer, a Korean laundress or a Japanese sushi chef produced in Hollywood.

However, there is a record of an interesting song, 'Chinese Blues', written by a British singer-songwriter and comedian Geroge Formby, in which a fictitious laundry owner, Mr Wu, lost his heart to a Chinese girl and his laundry has all gone wrong. Here Mr Wu is the leading role, rather than an extra. 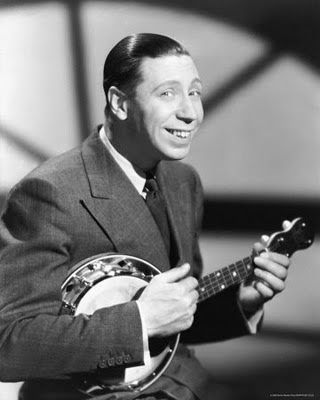 George Formby was most remembered for playing the banjolele, a kind of instrument with an American round banjo body and a Hawaiian fretted ukulele neck, and for singing his original comical songs. (See the photo, quoted from Slap & Tickle)

On a website dedicated to him, George is praised as a great person who "could hold a live audience in the palm of his hand as he sang and played the ukulele in his own inimitable style."

Composed in 1932, 'Chinese Blues' was his first successful record and later adopted by himself as the signature tune, with the renamed title 'Chinese Laundry Blues'.

Stereotypical figure as Mr Wu may be and perhaps some early-twentieth-century racism, prejudice and inappropriateness as there may be, I won't take it too seriously. Never mind. Replacing 'Mr Wu' with 'Uncle Sam', 'Chinese girl' with 'Scottish lass', 'Chinese Laundry Blues' with 'New York Laundry Blues', or whatever, I still see the Laurel-and-Hardy- or Chaplin-style hilarity.

Please refer to the lyrics below to see the whole picture of this song.

Now Mr. Wu was a laundry man in a shop with an old green door.
He'll iron all day your linen away, he really makes me sore.
He's lost his heart to a Chinese girl and his laundry's all gone wrong.
All day he'll flirt and scorch your shirt, that's why I'm singing this song.
Oh Mr. Wu, what shall I do, I'm feeling kind of Limehouse Chinese Laundry Blues.

This funny feeling keeps round me stealing
Oh won’t you throw your sweetheart over do.
My vest's so short that it won't fit my little brother.
And my new Sunday shirt has got a perforated rudder.
Mr. Wu, what shall I do, I'm feeling kind of Limehouse Chinese Laundry Blues.

Now Mr. Wu, he's got a naughty eye that flickers.
You ought to see it wobble when he's ironing ladies blouses.
Mr. Wu, what shall I do, I'm feeling kind of Limehouse Chinese Laundry Blues.

Now Mr. Wu, he's got a laundry kind of tricky,
He'll starch my shirts and collars but he'll never touch my waistcoat.
Mr. Wu, what shall I do, I'm feeling kind of Limehouse Chinese Laundry Blues.
Posted by Wei at 14:38 No comments: Links to this post 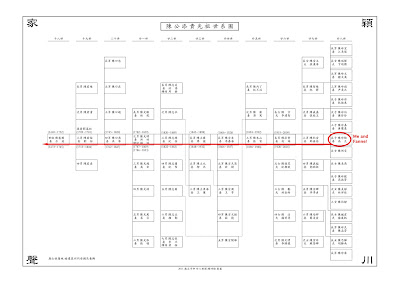 For about two weeks, since Ronne's birthday, I have been collecting names and dates about the Chen family and finally traced its history back to the 1660s.

With all the relevant information, I have managed to draw a genealogical chart, spanning from myself, the 28th generation, to [great]8 grandfather, the 18th generation of the Chens.

It's a pity that names and dates before the 17th generation are still unknown. I have yet to consult more genealogy books compiled by other clan members in early years.

It is the Chinese tradition to record male members and their spouses in a genealogy book. The one kept by my father was compiled in 1983 to supersede the old one which had been produced in 1923.

Nevertheless, fortunately, I haven't got more than the names on this chart, otherwise I wouldn't be able to arrange them neatly within an A3 sheet. Ronne can collect more in the future.
Posted by Wei at 17:31 No comments: Links to this post 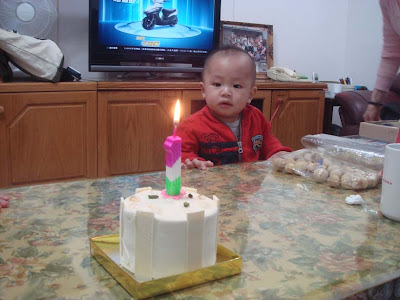 My son Ronne was born on 5 March 2010 in the Gregorian calendar and therefore we should have celebrated his first birthday last weekend. However, we didn't, because we had had.

My mum argues (she ‘argues’) that we ought to abide by the lunar calendar when it comes to life-cycle celebrations or anniversaries, just like how we have Chinese New Year and other traditional festivals. As a result, instead, we held Ronne’s birthday celebration two weeks ago instead, on the 20th day of the first lunar month, which fell on 22 February this year.

Yes, Grannie. You're the Grannie and thus whatever you wish counts. 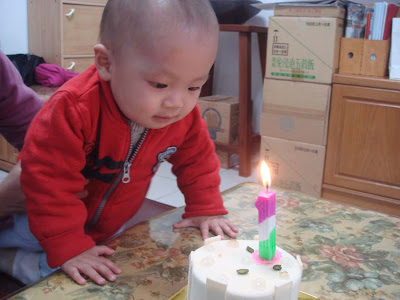 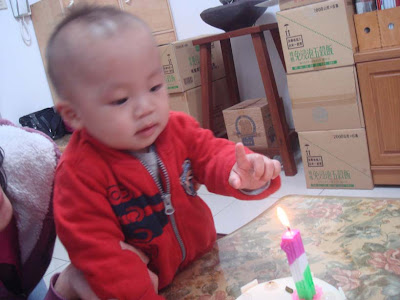 (I'm behaving. I'm just trying to count 'one' with my finger.) 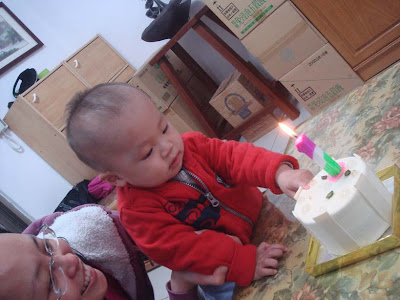