In 1991, Sir Paul McCartney marched on classical music and co-composed a semi-autobiographical Liverpool Oratorio with Carl Davis. He continued his exploration of classical composition, releasing his second work Standing Stone in 1997, the third album Working Classical in 1999 and a choral tribute album A Garland For Linda in 2000. 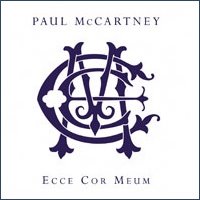 While working on the last two albums, a towering project was under incubation. In 1998, he was invited by Anthony Smith, the former President of Magdalen College Oxford, to compose a choral piece for a new concert hall of the college. Eight years later after the commission had been accepted, Paul's fourth full-length classical work, Ecce Cor Meum (Behold My Heart), for choir and orchestra in four movements, with an interlude featuring oboe solo, was released by EMI Classics on the 25 of September 2006.

This album is produced by John Fraser and recorded at the legendary Abbey Road Studios. Gavin Greenaway conducts the Academy of St Martin in the Fields, the Boys of King’s College Choir (Cambridge), the Boys of Magdalen College Choir (Oxford) and London Voices.

Since Ecce Cor Meum is sort of 'classical' classical music, rather than 'contemporary', 'atonal' or 'avant garde' classical music, composing such a work requires compositional techniques, such as harmony, counterpoint, orchestration, musical form and so on. I suppose either Paul is a great musical mastermind so he doesn't need any musical theories when composing, or he has actually spent some time hitting the books and then brought his own musical experience into theories.

Although I was never a pupil of music nor did I read music at any institution, I familiarise myself with all sorts of compositional techniques through endless reading and experimenting. Nevertheless, I can't compose an oratorio.