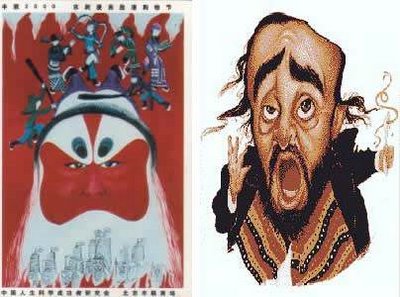 Over so many sleepless nights, I have been wondering if I would really screw up my PhD and disappoint all those who have been supporting me. Moving slowly, and unsurely, is my thesis; however, I have to perk up and keep writing no matter how much the thesis seems to be bunkum and balderdash. At the moment, I am struggling to finish a section on the singing styles of the 30s and 40s Shanghai pop song.

Although everybody knows Chinese traditional singing (for example Beijing opera) are very different from the Western bel canto (for example a dramatic tenor in a Verdi's opera), few people really know what makes the difference.

Hence, I copy some boring, technical, academic words from my thesis and paste them here. Read them patiently, if you think they may be interesting, but don't blame me for using technobabbles.

A fundamental difference is that Western and Chinese vocal techniques deal with the resonating cavities differently. According to the part of human body in which the sound a singer makes mostly resonates, singing voices may be categorised into three registers indicating the changing tonal qualities from pitch range to pitch range: the chest, the middle and the head voices.

The chest voice denotes a singer’s lower range of voice, which generally resonates in the chest cavity, and is usually described as having deep, weighty quality. The head voice is associated with bright, light singing voice of the upper end of a singer’s vocal range, which resonates in the mouth and the head cavities. The middle voice refers to the warm, rich singing tones of a singer’s middle pitch range resonating in the throat cavity, which is sometimes regarded as the crossover between the chest and head voices. 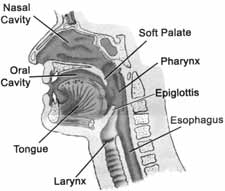 The Western classical singing style, or precisely the bel canto, is characterised by even vocal quality with the greatest amount of resonance along the whole of a singer’s voice range and every singing note smoothly merged with the next to produce continuous lines. To achieve this, a singer has to utilise all resonating cavities properly, maintain a fine balance among various voice registers, and develop seamless transitions between registers. Singing in this style, one is required to be able to place the head voice down to the notes that are normally produced as the chest voice, and vice versa. In other words, a trained vocalist would adjust the amount of resonance in different cavities to gain consistent tone quality throughout the singing range. For more favourable resonance, the larynx is lowered to expand the bottom of the pharynx and sometimes there are even adjustments in the usual pronunciation of vowels.

In contrast, rather than seeking to produce consistent tone quality across the entire voice range by using different resonating areas accordingly, in the Chinese traditional singing style, a vocalist sings principally in the head voice and develops brighter and lighter tones resonating mostly in the hard palate, the nose cavity and the head cavities. Therefore, resonance of sounds is fixed principally in the anterior part of the head. When singing, the larynx is positioned higher than it is in the bel canto style, and there is more laryngeal muscle tension. As every syllable has to be enunciated precisely, the pronunciation of a vowel is never modified for the sake of optimum resonance.

Generally speaking, due to the differences between vocal techniques, while using the bel canto method, a singer tends to produce mellow, round and open-throated sounds, singing in the Chinese traditional fashion, a singer’s tone quality is relatively nasal, bright with more tension in the throat.