An alternative version of Braised Lionhead 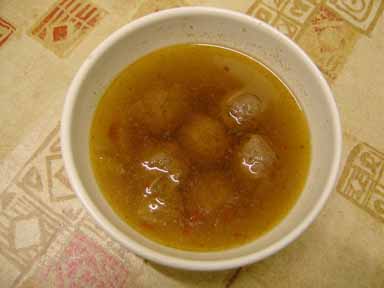 Reduced items in the clearance shelf of a supermarket can sometimes arouse a brainwave and give you a bright idea of what to eat.

As usual, I did my weekly shopping after Sunday service in the Church of the Holy Rude. I was just not particularly interested in beef today, but somehow a pack of lean cubed beef steak, a reduced one, caught my eye. Since it was almost past its 'best before', I supposed it might not be good enough for broiling, but could still be succulent if made into meatballs. I had seen this item scarcely when it come to my mind that beef meatballs in super mega hot spicy soup would be the main course for dinner.

I hand-minced those cubes with my everlasting cleaver, which has been with me since fifteen years ago when I started to learn cooking, then mixed beef mince with crushed garlic, smashed ginger pieces, an egg and some water, fiercely stirred all of them for twenty minutes, and finally made the mixture into balls. Deep-fried them and put aside.

Voilà, I've got my meatballs.

As for the super mega hot spicy soup, I tried first to create a piquant paste of spices, herbs and grease. Cumin, bay leaves, smashed stoned dates, chilli oil, Szechuan pepper, star anise, soya sauce, cinnamon and freshly crushed chilli were gently heated in sunflower oil and reduced into a thick paste. I then prepared the soup by boiling shredded Chinese leaves (cabbages) in chicken stock and stirring the paste into it.

Ta-dah, the soup was done as well.

At last, I put the meatballs into the soup, brought them into a quick boil. The main course for dinner was ready. It's an alternative version, i.e. my own version, of a Chinese dish, Braised Lionhead (Click here to see the authentic 'Lionhead').

It's a pity that Pedro was not here as these meat balls, I guess, are one of his favourites among my specialities. We had so many good times with Braised Lionhead, which used to be our team name when we attended pub quizzes, though we never won.
Posted by Wei at 05:30

Good to know you are a man with meat balls!

Yes, we must revive the braising lionheads + pub quiz when I am there next week. Not so sure about ending the night at Fubar though!