Mr Bean and I

Do I look like Mr Bean in any way? I don't know, but somehow more and more Taiwanese friends have been telling me that I'm Taiwanese Mr Bean ever since my fiancée made this comment long time ago.

I suppose because I have been trained up to understand British dry humour over the past four years and started practising all sorts of sparkling combination of British witticism and gesticulation in real life, those Taiwanese friends simply regard whatever they can't grasp from me as British humour and characteristic of Mr Bean.

I don't mind what they think; nevertheless, I just can't recognise any similarity between me and Mr Bean, or Rowan Atkinson. Last night I mulled over all various possibilities how on earth I could be related to Mr Bean, and finally arrived at an inescapable conclusion: I am a victim of the blasted media.

I won a DVD set of Mr Bean 10 Years Collection, which includes all the 14 episodes broadcast from 1990 to 1995, two unseen episodes and a documentary, on eBay a few weeks ago, and have been watching one or two episodes everyday ever since. I believe these comic episodes have made certain impacts on me. 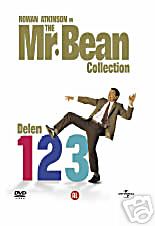 Of course I don't fall into hilarious situations, nor do I cook up any schemes or contrivances in the way Mr Bean does to solve problems. However, somehow, I start having silly and quizzical expression on my face when I feel disoriented or stranded in a sticky situation, or after I screw up something. Even worse, my hands also begin wagging in a moronic way.

Pedro writes here that Natascha Kampusch, the Austrian girl who was abducted and detained for eight years, learnt how to behave and talk 'properly' from what she saw on telly. I supposed she didn't watch Mr Bean.
Posted by Wei at 21:09

You are much more elegant than Mr. Bean, dear Principal! In addition to thin figure and exaggerative facial expression, I can't find out more similarity between you two.
My sons love Mr. Bean, either cartoon or comedy. I have no idea why they are always fascinated with it since they can't understand the dry humor. The other idols attracting my "simple" boys are 百獸王戰士、忍風戰隊、暴龍戰隊. Can you find the reason ?

Hm, let me tell you, May. First, if I can figure out why once I was so infatuated by these guys when I was a boy, I may be able to decipher the myth of boys' fancies.

Second, I suggest that you come to Stirling where we have a very good department of psychology, and I can assure that you will find an ideal supervisor for a pedologic project. In this case, you will solve the question by yourself.