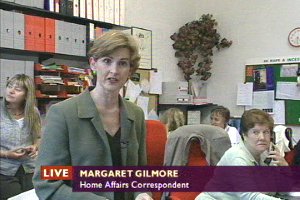 I've got a question for some publicans and clublords in Britain: What's the point to have TVs on the premises should customers can't hear a single word or whatever sounds on TV?

Since time immemorial there have been TVs in pubs or clubs with images budging on the screens and the volume turned down to an inaudible level, or simply switched off, against backdrops of head-banging music. I just don't understand what those mute boxes are for if nobody can twig what's really going on.

Maybe some would argue that in sports programmes, such as a live football match or golf tour, images talk for themselves. Therefore, what matter if we cannot hear those commentators?

I can't agree anymore. It's true that you don't really need to hear what the commentator say when watching Premier League or Six Nations, but can you make any sense of what's under discussion in the news, particularly when a guest is commenting on a particular issue live in the studio, or what's happening in a soap, or what a song is about in a music video, if all you have are jiggling human bodies with the accompaniment of some thunderous music totally irrelevant to what's on the screen?

I don't think it's any easy. So, can somebody tell me about the raison d'être of a mute telly in a pub or club? Or shall we pretend as if we were hearing impaired and thus it didn't matter whether the volume was on?
Posted by Wei at 04:03