Helen of Troy is back 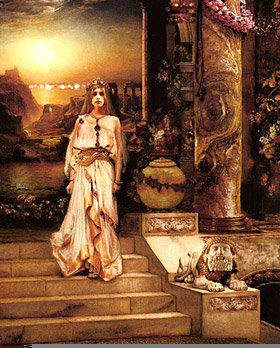 Helen of Troy was probably the most beatiful woman that had ever walked on earth, whose abduction by Paris brought about the Trojan War and fall of Troy.

According to Homer's Odyssey, she was exiled after the death of her husband Menelaus by his illegitimate son Megapenthes

In the Greek tragedian Euripides's play Orestes, she had long left the mortal world and been taken up to Olympus even before the war.

It doesn't matter which version is truthful to history, as I believe she is now around me.

Read what I have written for you Helena, mi mariposa en la noche.

Throughout countless sleepless nights flooded with torrential sweats, it is you, my sylph, the everlasting muse condensing into a dew drop before the dawn, the immortal goddess having sublimed into the zenith, who stroke every fissure of my hypothalamus with fingers full of charge and emboss my chest with reveries and incubi.

Lo, what I have to suffer in the days you remain incammunicado via the ethernet: without being nuzzled by your whispers through words blinking on the screen, a day is never complete, let alone the night.

Helena, for you Troy had fallen, but now another citadel is collapsing. Return to me, even though cyberspace is our humble cot, and even though I can barely feel you in real.