In December 1941, about the time of the Pearl Harbour Raid, a group of American fighter pilots, led by the controversial Maj Gen Claire Lee Chennault, organised the American Volunteer Group(AVG), widely known as the Flying Tigers, and flew for China to fight against the Japanese.

Following Chennault's tactics of 'defensive pursuit', the Flying Tigers flew Curtis P-40 Warhawks to guard the Burma Road, Rangoon, as well as some other strategic locations in Southeast Asia and West China.

A friend of mine, a fighter pilot and officer in the ROC Air Force who nicknames himself The Welkin (Tiankong ren, in Chinese), has a mania for these tigers. Unsatisfied with his ever-expanding collection of memorabilia, publications and replica or caricature models, he simply painted a portrait of Chennault, in the background with a Curtis P-40 Warhawk, himself in the pilot helmet, another anonymous pilot and a Blood Chit issued by the Chinese government. 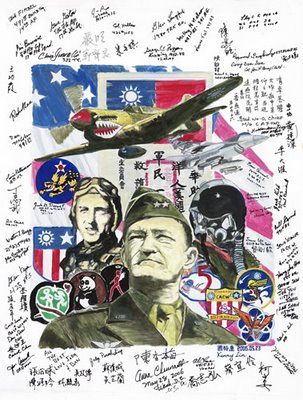 Here is some background music for The Welkin as a salute to his work.

Though having exerting painstaking effort on this potentially historic masterpiece, The Welkin found that he still needed more so that his soul would rejoice in exultation. He decided to make this painting a true tribute by embedding the autographs of those heroes around the portrait and other figures on the canvas – genuine autographs, of course.

I don't really know every single detail of how he solicited for these signatures, but there is an episode which involves my mentor and lifelong friend May, over whose eyes I shall never pull the wool, as she reads me like a book.

Perhaps with imprinted on mind since her childhood the images of her father, now a retired navy commander of ROC Navy, and her late grandfather, a respectable general of ROC Army, she always feels affection for those bonnie lads in well pressed and creased uniforms. This may further explained why she married a police officer immediately after earning her master degree in mycology.

She was dispatched by The Welkin to crash down the Air Force General Headquarters in Taipei to request for one more autograph. As she would never miss any opportunity to glimpse gorgeous uniform chaps, this was definitely a pleasant errand – probably an unforgettable journey, just like the one we had had in the misty Jiufen in 1993 when I had a crush on her (well, since I am not a uniform man, it never worked out).

Unfortunately, quite the opposite to her wishes, she was dumped in a poorly designed, out-of-taste reception area, and had waited for at least one hour to retrieve the painting with one more scribble added.

Now that The Welkin has collected enough autographs, it's the time to add the last stroke, certainly not his own signature on the canvas, but a move to make this piece priceless – reproducing sixty copies of this work for whatever purpose in the future while keeping the original in a safe place.

I have no idea if he would commissioned a security company to instal infrared burglar alarms, automatic fire sprinklers and missile-proof walls, just like those equipped in Musée de Louvre, but may the spirit of the Flying Tigers be with all fighter pilot, as was in the beginning, is now, and ever shall be.

Anyway, by writing this I would like to pay my tribute to Maj Gen Claire Lee Chennault and the Flying Tigers for their volunteering work in China during WWII, to give a salute to the fighter pilot The Welkin, and to mark the imperishable friendship between me and May.