During the regime of Chairman Mao, there was once a proposal for a new set of Chinese writing: to get rid of those ideograms and to get on board the developed world by using Roman letters.

However, Chinese is a language with a high degree of homophony (each of two or more characters having the same pronunciation but different meanings), and the sound of every Chinese character carries a specific tone, or pitch movement, which is an integral part of a word and used to distinguish its lexical meaning.

As a result, it is impossible to abandom Chinese characters in favour of romanisation.

Have a look at the image below: a short paragraph containing 91 Chinese characters, excluding another five in the title, all with the eaxctly same sound shi in different ways of pitch movement.

If you transliterate the text into roman letters, there will be 91 shis. How can you make sense of them? If you are interested, read the translation in English and listen to the Chinese sounds of this text. 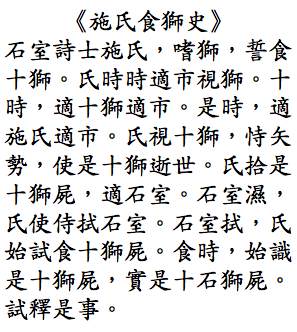 N.B. Thanks to Yung-Yao who proofread the Enlgish translation.

Thank you very much, Professor Wei, I have always wanted to see this again, since I memorized it in school 45 years ago. I'm so grateful.