The 'Fork Handles' sketch from The Two Ronnies 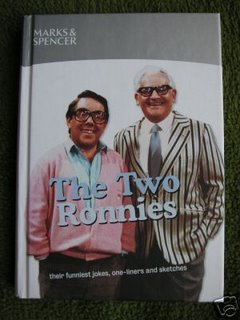 I've never thought I would become an eBayer, but I did give it a go and successfully won a bid – a hardback book of The Two Ronnies, selections of their funniest jokes, one-liners and sketches, for only 99 pence.

As I learnt English in Taiwan mostly by listening to BBC World Service and reading Jane Austin's novels, before coming to Britain, I supposed I didn't have to worry about how to speak proper English. However, most people I met in the British Isles simply looked at me with a friendly yet seemingly sardonic smile, pondering what bloody period I was from, when a torrent of archaic, over-mannered words poured from my mouth.

Gradually, I realised that nowadays Brits would not speak in the way a Georgian or Victorian butler did, nor would they chant verses of Shakespeare or Milton in their daily life. Just as what the saying 'when in Rome, do as the Romans do' suggests, I shall say what the Britons say when I'm in Britain.

Therefore, I had no choice but switched from period dramas to comedies, such as Yes Minister, Blackadder and The Two Ronnies, so that I could learn more practical, somewhat up-to-date English expressions, and meanwhile to sharpen up my sense of British dry humour.

The famous Fork Handles, which was voted the Nation's Favourite Sketch, is also included in the book I've just received. In this sketch an ironmonger became increasingly frustrated while serving a thickhead because he kept misunderstanding what his customer really asked for, as a result of the items required being homonyms of the items provided:Obviously, the wordplay is based on British English – the drop of 'h's in 'handles', 'hoes' and 'hose', and the omission of 'r' after the vowel in 'sore'. I'm sure though confusion like this may not really polish up my English, it is indeed good subject matter for daily conversations.
Posted by Wei at 21:56