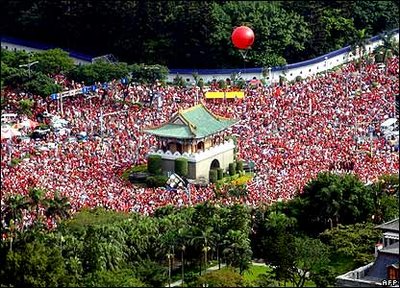 While all the time China elbows Taiwan out of all sorts of official international organisations and nowadays most Western countries pay more attention to China, Taiwan has recently regained some international media coverage.

Much to my embarrassment, it is the corrupt Taiwanese president Chen Shui-Bian, his avaricious in-laws and his venal aides who bring this island, which has almost dumped by most Western countries into oblivion, back on the global stage.

Protesters in their red outfits have congregated in front of the presidential office in Taipei since the 9th of September to demand Chen's resignation. This claimed grassroots demonstration catches the eyes of some news editors, to name a few:With a two-thirds vote in the Parliament (or officially, Legislative Yuan) together with an absolute majority in a plebiscite, the Taiwanese can impeach the president. However, as the situation is getting tricky, I wonder what would be the most appropriate verb to depict how hard Taiwanese people are striving to sweep Chen and his gang out of the presidential office. Here are some candidates:
Posted by Wei at 05:42