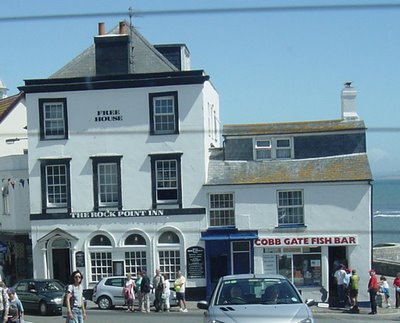 China is rising. Everybody knows. But what has it to do with England? It all started from piracy or the art of reproduction.

Liberated from the constraints of centrally planned economy, Chinese people have come to realise that fruits produced and distributed under free market economy bear more juice and taste more saccharine. The dragon finally woke up to the irresistible capitalism from decades' sound sleep and the Utopian dream of socialism.

In order to get on board the capitalist cruise down the river of fortune, Chinese people seize any opportunity to reap the benefit of economic reform: starting whatever private business, regardless of its size, capital structure and so on as long as it makes money. While this definitely contributes much to China's whirlwind economic growth, it causes problems, among which piracy is one of the toughest nuts to crack.

Virtually, from fake designer handbags and clothes, replicas of brand name watches, to bogus diploma and all sorts of permits or certificates, nothing can't be forged in China. There is always among 1.3 billion people a need of spending less to bathe in the same superficial glamour emitted from an adorable trade mark.

Although in piracy business reproducing a convincing verisimilitude of a genuine item is essential, sometimes there is a compromise. A deliberate twist of a trade mark may guarantee a position of never being sued while meeting users' need. Look at this masterpiece: set-of-four SQNY batteries. It's hard to say if SONY would win the case should they take it to the court. 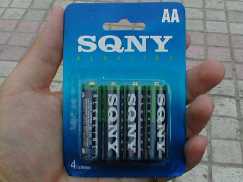 The unauthorised use or reproduction of other people's work is absolutely a violation of laws; nevertheless, does this apply to all works created by human beings? What about an architectural piece?

In Songjiang, about 19 miles away from Shanghai, a major housing and commercial development called Thames Town has come to a successful end. This new town is really an exhibition of 500 years of British architecture: half-timbered Tudor buildings, white stucco Regency terraces, Victorian red-brick warehouses, gabled 20th century buildings, a covered market with distinct echoes of Covent Garden, a ferreted castle, a windmill, village greens and a Catholic church with a similar spire of St Mary Redcliffe in Bristol.

Do not doubt. Here is a newly constructed residential and commercial town in Shanghai, a picturesque 'Little Britain'.

What impressed me most are these two buildings which almost copy detail-to-detail the original two in Lyme Regis, Dorset, England. Make a comparison between the photo at the top and the one below. 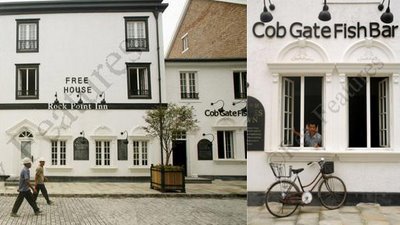 There are only very few differences, for example:Gail Caddy, owner of the real 256-year-old pub Rock Point Inn and the real Cobb Gate Fish Bar next door, once wrote to Ben Thompson, the Press Officer of the actual designer of this new development, Atkins Group, to address her concern about her properties being ripped off, but I don't know if the company has ever got back to her or offered her any explanation.

Nevertheless, can you copyright the façade of your building?
Posted by Wei at 02:00