Audition for embarking on the operatic society 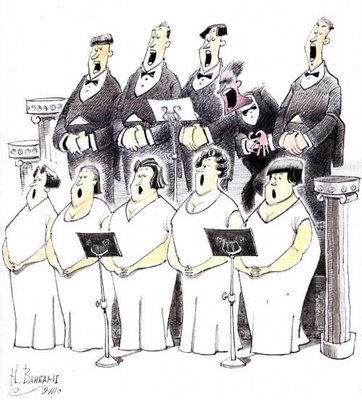 (Image ©2003 Hamid Bahrami)Entering the fifth year of my life in Scotland, or from a wider perspective, Britain, I'm surely getting closer to my doctorate on the one hand, but on the other, I'm apparently retreating into the past to rediscover what are gradually fading into oblivion and giving way to other modern audio-visual entertainment.

I joined the Choir of the Church of the Holy Rude in October 2002 immediately after I arrived in Stirling, and have spent almost every Thursday evening for the choir practice and Sunday morning for the worship service ever since.

In November, with a zeal to embrace great choral works rather than merely to be confined in church anthems and congregational hymns, as well as encouraged by some elderly ladies in the church choir, I joined the Stirling University Choir.

However, probably because I am a fastidious, stubborn pedant and can't be asked to sing Brahms in English, I left the choir after singing Brahms's Ein deutsches Requiem in English at a concert in Dunblane Cathedral in May 2003. Speaking from a personal, and maybe biased, standpoint, replacing the original language in a vocal work, be it an art song, choral piece, opera or musical, with another language is absolutely bastardisation.

How can we distort the sound that was neatly designed by the composer simply to accommodate to the singer's or audience's language competency?

In September 2003 I switched to the Stirling City Choir and became the only Oriental face there. I love the city choir, although most members are senior citizens, and gents are always outnumbered by about three times the number of ladies. This is fairly common in Britain – choral societies are no longer appealing to the young generation, and men would spend more time in pubs or football matches.

On Wednesday, just three days ago, I joined the Stirling and Bridge of Allan Operatic Society, where, unlike the church choir, university choir or city choir, which are sort of all-encompassing and require no auditions, a musical director and a committee assess all new comers' musical ability.

It was an interesting rain-soaked evening. Having been practising my audition piece 'On the Street Where You Live', a song from the Broadway musical My Fair Lady, for several days since I made up my mind a week ago to expand my musical territory, marching on the field of operas and musicals, I crooned this show tune in a dazzling voice against the splash of a downpour outside the hall of Allan Park South Church.

Hardly had I finished the first verse, just a third of the song, before the musical director stopped me and said, 'enough, enough, that's good enough.' He then asked me to sing scales in order to assess my vocal range. Apparently satisfied with my E-g', wide enough for a baritone-bass, the musical director and the committee commenced a confidential meeting while I withdrew into the corridor. Three minutes later, they came out to congratulate me with a pithy remark: 'You're in!'

What a 'daunting' audition! It seemed that I had been preparing a formal speech, as formal as an address to Parliament and it turned out to be a casual chat. Anyway, I'm in the operatic society, exploring a dwindling tradition of British social life.
Posted by Wei at 22:27