Finally I was in the Last Night of Proms 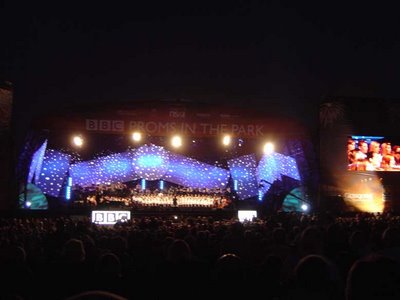 Finally, I made my debut in the Last Night of the Proms last Saturday, though as a spectator rather than a performer, and though not in the real one at the Royal Albert Hall but the Proms in the Park in Glasgow Green, one of the five outdoor venues across the country. Nevertheless, unlike those in Hyde Park who had to pay £ 23, in Manchester £12.50 and in Swansea £7.50, I simply requested for and then, as lucky as those in Belfast, was randomly selected by the organisers in Glasgow to win free tickets.

Under the same theme Proms in the Park as they were, all of the outdoor venues in fact had their own concert programmes, and were only teleconnected with the Royal Albert Hall for about 20 minutes.

It seems that every year at the last night of the Proms, the whole country is reunited by classical music and the bygone glory of the British Empire is therefore reinvigorated. People from every corner of the country shoulder their way into the Royal Albert Hall for the Last Night by attending at least six other Proms beforehand during the Proms season in order to be qualified to buy the ticket, or simply by paying the exorbitant price to secure a seat through certain agent.

However, there is always a touch, or actually a distinct odour, of nationalism – not in terms of the United Kingdom as a whole, but rather, four constituent nations individually.

While in Hyde Park and Manchester St George's crosses sprinkled over the sea of fluttering Union Jacks, in Glasgow I could only count those Union Jacks immersed in Saltires on the fingers of one hand. I supposed in Swansea Union Jacks must have been shovelled down by their red dragons.

I have been practising Jerusalem and Land of Hope and Glory long before this great night, but as much as it has been worrying me, in Glasgow the linkup with the Royal Albert Hall on the screen was cut off and switched to Glasgow Green on the scene after we carolled Rule! Britannia.

I couldn't understand why for the Scottish singing Rule! Britannia while waving Saltires was less absurd than chanting Jerusalem or Land of Hope and Glory with the English. Though it may be regarded as nothing unusual by Britons, speaking from my own viewpoint, the smell of this sort of regional nationalism is much more pungent on site than on TV.

Anyway, it was a pleasant night with the good company of my English siser Francesca, my landlady Val and her friend Jane - none of whom are Scottish.
Posted by Wei at 22:22