Making my outdated laptop up to date 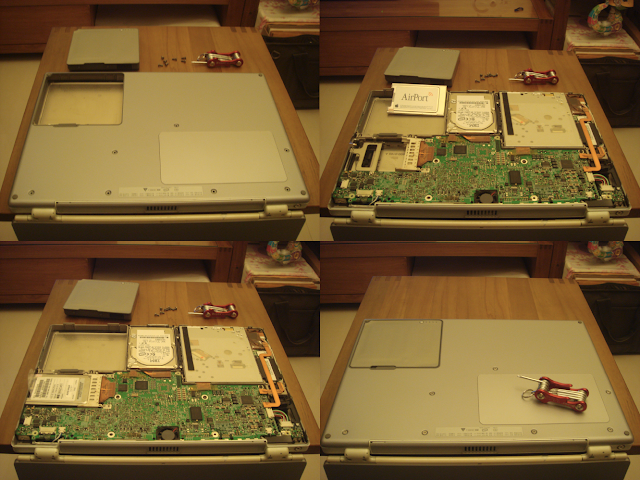 Last night, I spent some time upgrading my old PowerBook G4 to a laptop with wireless capability.

PowerBook G4 is my first-ever laptop. It had served me since summer 2002 when I moved to Scotland for doctoral study, and was forced to retire due to an accident in summer 2007. I had some champagne to celebrate my graduation and wedding, and so did the laptop.

Much to my amazement, the champagne-poured PowerBook G4 became alive and kicking after a couple of weeks, but it was still superseded by MacBook Pro Core 2 Duo, my second laptop, purchased after the accident. PowerBook G4 was stored in a bookshelf and has remained there ever since.

Now even though I have MacBook Pro Core i7, the third laptop in my life, I still miss the old good times with PowerBook G4. It helped me finish my doctoral thesis; it helped me complete so many commissioned musical works (and make extra money); it helped me connect to my beloved and family when I was in Scotland.

PowerBook G4 is definitely well past its sell-by date, but it still works. Therefore, I decided to fetch a wireless card to make this outdated machine up to date–being able to communicate wirelessly.

I found a second-hand Apple AirPort Card on eBay for USD 18.92 (including postage) and a set of hexalobular socket screwdriver (also known as Torx or star screwdriver) for TWD 145 (roughly USD 5.00) at a hardware shop near my home. Didn't cost much, did it?

It took me only 5 minutes to remove the back cover, instal the wireless card and restore the back. However, it took more two hours to download all sorts of software update files and update the operating system, Java and so on.

Won't blame it, as along as it keeps being in good working order and brining back old good memories.
Posted by Wei at 16:16