Fetching a snake money box for the year of the snake 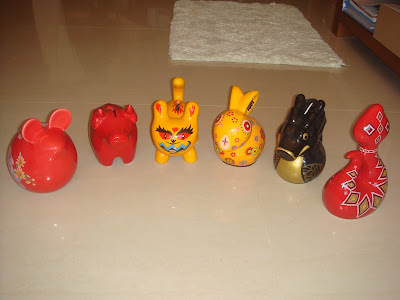 (Six money boxes released by a department store in Taiwan since 2008, from left: Rat, Ox, Tiger, Rabbit, Dragon and Snake)

Once you start to collect some things, especially those which can make up certain group, you have to be prepared to feel all the time an overwhelming obsessive desire to possess a complete series, to become irredeemable.

Just as how I maintain the ritual of counting down to New Year at the same spot and then taking a photo thereafter since the year end 2006, I have been chasing after the money box in the shape of a specific Chinese zodiac animal for the year of that animal since 2008.

Shin Kong Mituskoshi, the biggest department store chain in Taiwan, began to issue ceramic saving banks in shapes of twelve Chinese zodiac animals in 2008. Twelve different ones will come in the twelve ensuing years. It can only be redeemed for or bought when a customer spends more than certain amount of money, not to be purchased straightaway.

This morning, I have just fetched the sixth–the snake. It takes six more years to complete a series of the twelve animals. I am so determined to collect a whole series and will visit this department store every year as long as I still reside on earth.
Posted by Wei at 13:30

I am a 19 year old female quadriplegic and a mother of a two-year-old daughter. I am not able to work because of my disability but I do have a voice-activated computer and I know a lot about computers and the Internet. I want to start a website I do not know about what. I need IDEAS! I would like to make some profit on my website but I do not know how to do that or how to get companies to pay to put ads up on my website. I don't even know where to go to start my own website. I need lots and lots of help if someone would like to help me out or maybe be partners with me when the website starts making a profit you will get a portion of the profits..