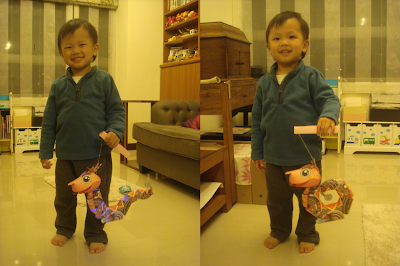 (Ronne and the stretching and curling snake)

The Lantern Festival, the 15th of the first lunar month, falls on Sunday, the 24th of February this year. Just like last year, we received a DIY set–a hand lantern in the shape of a snake, this year's Chinese zodiac animal.

It took use more time than it did last year to assemble the cardboard lantern, because, as you can see in the photos, the snake's body is composed six movable segments, which require more delicate efforts to fit together.

Ronne is going to celebrate the third Lantern Festival in his life with another hand lantern. What a clever design: it can be held in two different fashions, stretching or curling.

Officially named Haha (哈哈), this colourful, shiny snake is painted from its head to tail with 14 graphic decorations inspired by the traditional patterns or symbols from the 14 respective indigenous peoples in Taiwan.

As opposed to its negative impression among the Han Chinese, the snake is believed to be the guardian or embodiment of ancestral power in some indigenous cultures in Taiwan. A hand snake lantern with indigenous tones and colours is obviously designed to bring more positive energy and blessings to all the people in Taiwan.

The lantern festival is traditionally the last day of the Chinese New Year and all lunar new year celebrations conclude on this day. The spring semester 2013 has already begun last Monday in theory; it will surely start next Monday in practice, seriously. 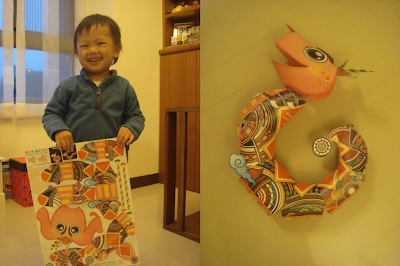