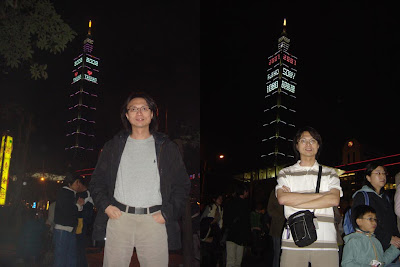 (Any changes between a married PhD and an unmarried student?)

Standing two blocks away from Taipei 101, I saw 2007 become the past when the fireworks display ushered in 2008 with a bang atop the world's tallest building. Again I shared this moment with the same woman as last year.

SONY won two consecutive bids for the sponsorship of the 2006 and the 2007 fireworks countdown and therefore had 2006 BRAVIA by Sony and 2007 SONY BRAVIA displayed at the tower in respective events. This year the governmental Tourism Bureau is the sponsor so the tag line is 2008 ♥ TAIWAN, showing no commercial brand name.

Rumour has it that this would become the last annual pyrotechnic show at Taipei 101 because the building is expected to reach full occupancy by the end of 2008 and thus space for holding fireworks displays will no longer be available. In addition, the occupiers may not grant permission to instal the sponsor's illuminations on the exterior of their offices. Hence, my first new year's countdown with fireworks at Taipei 101 after I tied the knot may become the last.

Whether the fireworks takes place again next year, this year's show could prove to be the last time Taipei 101 brings in the new year as the tallest building in the world, because this building will lose the title to another skyscraper, the Dubai Tower, in late 2008 (I thought it was Shanghai World Financial Centre that would supersede Taipei 101, but according to CTBUH, it wouldn't).

I hope wherever I am at year end, I'll still be able to count down to 2009 with my wife, even though we have to count one more day in February 2008.

Watch the video clip and see if the spectacular display of 12,000 rounds of fireworks at a cost of 646,000 USD has outshone last year's show.

I say by looking at the pictures, married PhD Wei is very confident and open while unmarried student Wei is protective and uncertain about the future.