25 Dec: once a public holiday in Taiwan 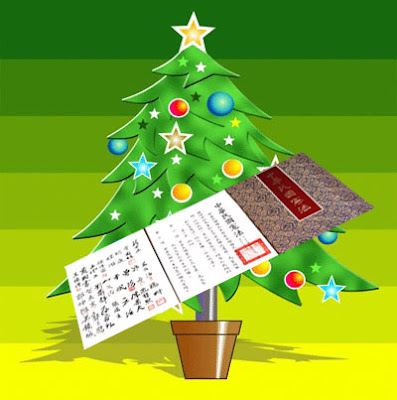 (Image of the Christmas tree from HappyNew.Com)

The festive season is upon us and people, including those who are not religious or do not even believe in Christianity, are performing their festive routine again – taking holidays, attending parties, binge eating and shopping or whatsoever.

I understand discussions about this matter have long gone stale, but as most people in Taiwan don't really 'celebrate' Christmas in the way most Westerners would do (most Taiwanese believe in Buddhism and Taoism), nor is this religious festival a public holiday here, it may not be regarded as repetitious and threadbare to ask the question:

What's the point of doing a lot of crazy, merry-making stuff to commemorate the birthday of someone whom you don't believe in or you don't even know?

Actually, Christmas day was once coincidentally an official holiday in the Republic of China, not the communist China but the Republic established by Dr Sun Yat-sen (Follow these hyperlinks if you are interested in the relationship between Taiwan and ROC). The Constitution of the Republic of China was promulgated on 1 January 1947 and went into effect on 25 December of the same year. In 1963, the 25th of December was made a public holiday to commemorate this historic event in the democratic development in the country.

As a result, people in Taiwan had long had a day off on the 25th of December and been able to attend whatever event, be it religious or secular, the night before.  I believe there must have been some folks mistaking the Constitution Day for Christmas.  However, this holiday was annulled in 2001 when the two-day weekend was formally implemented in the public sector lest there would be too many holidays or non-working days a year.

Several months ago, I was invited to write something Chinese-but-not-too-Chinese to be used in an advertisement for a biotechnology company in Taiwan. At one point, I was also asked to rearrange and make another 'jingle-bell' version so that they might use it on other occasions in the future. As this Christmasy version hasn't yet been employed in any advertising campaign and I'm still the owner/right holder, let me put it on my weblog and wish all my readers, no matter what your faith may be, a very happy holiday and a prosperous new year.

Interesting! I love the jingle, too!