In Fountain I met KKBox 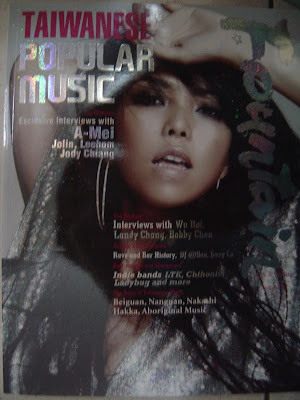 (Cover photo: A-mei, the first and only Taiwanese singer so far to grace the cover of Newsweek, 8 Jan 2001 issue)

In June 2006 the National Cultural Association launched Fountain, a biannual culture magazine about culture, art and lifestyle in Taiwan targeting English readers, not to be confused with the American religious Fountain.

Perhaps because I was working too desperately on my doctoral thesis when the organisation announced the release of the first issue in 2006, not until yesterday did I realise the existence of such an interesting made-in-Taiwan English periodical.

I came across the fourth issue (Dec 2007) on the theme of Taiwanese popular music in Eslite yesterday and then learnt from the official website of Fountain that three issues on Taiwanese cinema, design and cuisine respectively have been published from mid-2006 onwards.

As a scholar of popular music studies and an individual who has a penchant for integrating homeland affairs into international discussions, I bought the latest issue on Taiwanese pop without hesitation. Skimming through the magazine on my way back home, my eyes were caught by a short item – KKBox, an online music solution.

KKBox is a subscription site offering legal, unlimited music downloads for a monthly fee of 149 NTD (roughly 4.50 USD), which has captured a membership of 300,000 and a roster of 140 contracted record companies, including the four majors, Universal, Sony BMG, EMI and Warner. According to its chief operating officer Chris Lin (Lin Guanqun 林冠群), KKBox would turn a profit in 2007 although it planned to pay those participating record companies licensing fees of between 4 and 5 million USD in total.

When fewer and fewer people would pay for physical CDs ('It sounds cool; can you send me the mp3?' I bet this kind of request is not unfamiliar), some artists move on to an old track, switching back to the vinyl. I suppose vinyl records remind or good old days and mean more value to some musicians and fans. However, in order to serve the mass market, they offer digital downloads as well.

For example, Zoey Van Goey, a Glasgow-based trio made up of my doctoral colleague Matt Brennan and the other two members, Michael John McCarthy and Kim Moore, released their debut single Foxtrot Vandals on 7" vinyl and digital download in October 2007.

In an era when physical CD sales continue to dive and retailers diversify into DVDs, video games or other audio-vidual software, online music sales, together with mobile ringtones or other digital spinoff merchandising, will sooner or later become a major source of revenue. Legal online music stores such as eMusic and iTune Store will for sure serve as an important distribution channel for record companies.

Unfortunately, KKBox does not support Mac users. I can neither preview nor purchase anything from its site. Although I'm with iTune Store, it does not offer Mandarin pop, and therefore, well, I'm still on the illegal side when it comes to domestic music industry.
Posted by Wei at 14:53

Actually you can also play KKBOX on Mac, but maybe you have to install some softwares like this...

Cheers, guys. Thanks for your advice.

As I don't really want to instal XP or VIsta on my Mac, I'm still waiting for other solutions.

Nevertheless, it's good to see healthy development of online music service in Taiwan.

You can use the KKBOX web player.