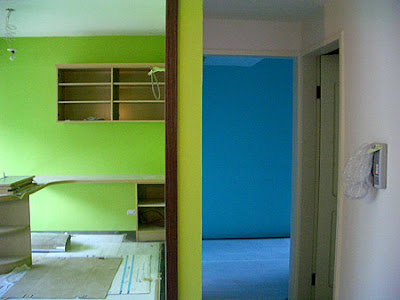 Last year, on an ordinary day, with a firm belief, as induced by the announcement on Blogger, that the original settings could be saved and all the changes reversed if desired, I followed the instructions on the 'manage your blogs' page to try out the new fancy customisable template for this weblog. However, I discovered in the end that there was no return.

I changed the background and most page elements of my weblog from grey or something I couldn't remember to 'green', which, originating from the colours of the Democratic Progressive Party (DPP), represents the political camp that favours Taiwan independence over Chinese reunification. Perhaps because of my own political view or just due to the colour's most common associations with nature, growth or hope, I chose green unconsciously.

While a change of colouring on a personal blog doesn't mean anything to others, a shift of the majority colour in the parliament is definitely significant to the people.

The results of the parliamentary polls in Taiwan yesterday proves that the legislature is going to be 'blue', which, derived from the party colour of Kuomintang (KMT), stands for the camp that leans towards a Chinese nationalist identity and advocates greater economic linkage with the People's Republic of China.

Taiwan's opposition nationalist KMT has won a landslide victory, securing 81 seats in the 113-seat chamber. Trounced by KMT, DPP gained only 27 and suffered the worst setback since its founding in 1986. Some people believe that there will be a bandwagon effect where KMT will continue to win the presidency in March, whereas others predict a pendulum effect where the 'green' camp will galvanise greater support and catapult their candidate to victory.

Will we see a pendulum or a bandwagon? Whichever the case may be, the colouring of Principal Wei's Weblog stays green.
Posted by Wei at 14:18