Tallest building in the world, for the time being 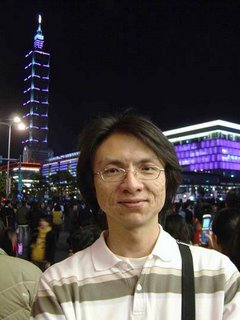 Perhaps you folks are all aware that Taiepi 101, original named Taipei Financial Centre, is the tallest building in the world at the moment, yet, I suppose, few of you know that my home in Taipei is just 500 yards away from this building.

Taipei 101 has 101 stories above ground, hence the name, and five underground. The construction of the building began in January 1998, half a year later after my family moved to Taipei from Keelung, a harbour city where I was born and brought up. Its roof was completed in July 2003 and its pinnacle was fitted in October 2003, which made it surpass the Petronas Twin Towers in Kuala Lumpur by 57 meters. Unfortunately, I had been in Scotalnd when the entire building was formally opened on the 31st of December 2004 amid a spectacular New Year's celebration with live performances and fireworks. I've never attend any New Year shindig around the area since the building was opened.

Nevertheless, I made it last December when I was back in Taipei. I was among the boisterous, frenzied crowd on Hogmanay watching the extravagant firework display. Have a look at this!

Wow! Absolutely fascinating, isn't it? 10,188 rounds of fireworks featuring 15 differnt themes were launched from the illuminated Taipei 101 for 188 seconds.

As another tallest-building-to-be in the world, Shanghai World Financial Centre, is under construction and will be completed by the end of 2008, you still have one more opportunity to visit Taipei 101 to witness Hogmanay fireworks at the tallest building of the world on the 31st of December 2007.
Posted by Wei at 01:28