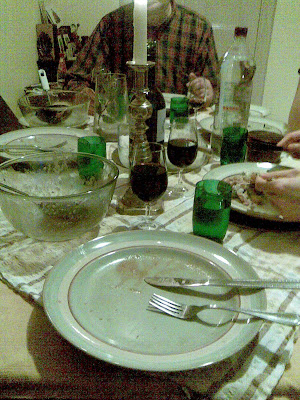 (Well, I suppose it wouldn't take more than 2 seconds for the readers of this blog to find out an image of Kung Pao chicken through Google, so I would rather upload a picture of empty plates.)

During my short visit to Britain this summer, I spent my last night, 16th August, in Stirling with old university colleagues at Mark's place. I was so delighted to cook for them at the reunion, as I usually did for colleagues, friends and people of the local community when I studied at Stirling University. Mark, Steve, Matt, Nicki and I had a very good evening.

For the sake of Mark, a foodie who has piles of cookbooks in his kitchen and cooks almost all the dishes mentioned in those books, and who, I believe, has all spices and herbs in the world in his cupboard, I would like to offer my own recipe for Kung Pao chicken (宮保雞丁), one of the dishes I prepared that night.

Kung Pao chicken is a classic Chinese dish originating from Sichuan, China. It is believed that the dish was created by, and therefore named after, Ding Baozhen (丁寶楨), a late Qing Dynasty official in Sichuan, who, after his term as governor, was commissioned as an assistant to the royal tutors to the crown prince and called Ding Kung Pao (丁宮保) thereafter.

As the recipe below is absolutely mine, it may differ from that in any Chinese cookbook and the measurements only act as a rough guide.

IngredientsMarinadeSauceMethod
PS Hey Mark, have you tried Braised Lionhead and are you going to do Kung Pao chicken? You should upload some pictures in the future on the facebook!
Posted by Wei at 16:29