Micro mini umbrella from the US 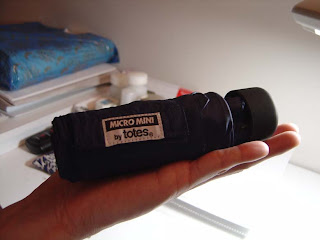 I've just been back from a two-week holiday in New York. Apart from reunion with my sister whom I haven't seen for a year, there was a great discovery: not everything in the States is necessarily big.

I suppose most people have the impression that in the US everything is big, extremely big, so unnecessarily big that sometimes we feel we were in Brobdingnag, the land occupied by giants in Jonathan Swift’s Gulliver’s Travels. It seems that the Americans have a penchant for supersizing things. They have offers such as ‘supersize your hamburger or coke for just an extra ¢1’, super-overweight people and therefore clothes in size XnL. But, returning from the holiday, I twigged that not everything in the States is necessarily big.

I brought a tin of M&S shortbread for Marcia as a birthday gift. I also received a ‘wee’ gift from her because, just as in our undergraduate days in Taiwan, she always remembered that my birthday came ten days later after hers and always gave me something unusual that, in her words, fitted my image, for example, duplicated contemporary paintings or sweetcorn facial masks.

This year Marcia gives me a totes umbrella. Obviously, her memory serves her pretty well so that she remembers that I had a brolly with me all the time when I was an undergrad at the National Taiwan University because I commuted between the University and my hometown Keelung, the harbour of rain (read this for more about my childhood memory of rain). However, she apparently has slightly unsatisfactory meteorological knowledge of the weather in the British Isles as she doesn’t realise that I simply can’t hold firmly a brolly when a Scottish gust of wind blows.

This umbrella, according to the tag, 'folds really small to fit most anywhere' and 'opens full size', but it's indeed so super-small that it hardly sheltered me and Marcia from a sudden shower when we were walking on the campus of Rutgers where she completed her master degree. 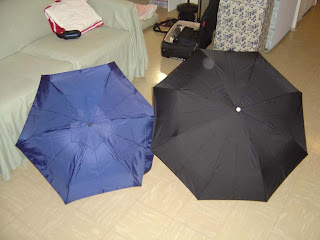 Look, this umbrella is realy a bit smaller than an ordinary one. Ergo, I can assure you that not everything in the States is necessarily big.
Posted by Wei at 02:36