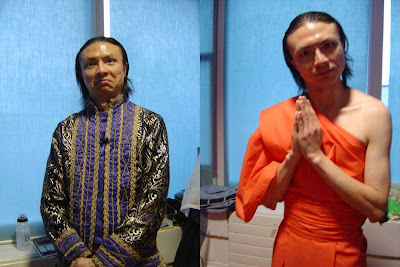 I passed the audition to be accepted into the Stirling and Bridge of Allan Operatic Society last September and was then cast as the Interpreter for its 2007 show The King and I presented at MacRobert Arts Centre from 12th to 17th March, including 3 matinées and 6 evening performances.

I'd done some Chinese operas before I came to Scotland but I had no experience with musicals. It's really my debut on Western musical stage. I took great delight in presenting such a persona although I had only a few lines. In addition to the Interpreter, I also played other walk-on parts, a slave and a priest, and therefore at one point I had to change from one character to another within 30 seconds. It's good fun to run off-satge and on-stage while changing.

In the original script at Act 1 Scene 1 the Interpreter was kicked by the Kralahome (sort of 'Prime Minister, the King's right-hand man) and sent sprawling. However, our director Alan C Jones just wanted a more dramatic effect so the Kralahome was asked to punch my tummy and then kick my bum. Me and Jim Howson, who played the Kralahome, really enjoyed this modification.

As the Interpreter should be kind of middleman who puts on airs and thinks he is an important figure, I just showed a funny expression on my face. This was a successful deed; the audience loved it.

I don't know which show the committee will choose for our 2008 show but I'm sure I will get a part and create a new expression on my face.
Posted by Wei at 09:00