I collect thimbles and therefore I am a digitabulist 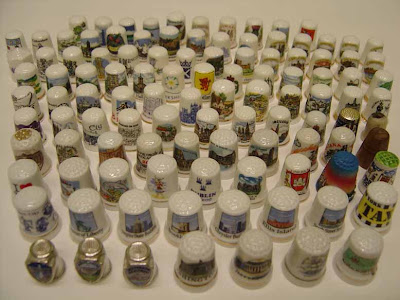 (Part of my thimble collection)As mentioned in the previous entry, apart from admiring cherry blossoms, which are supposed to betoken the friendship between the US and Japan, and observing how the hotel-dimensioned White House is belittled in size by the grandiose Capitol, I bought some thimbles in Washington DC.

I came to know souvenir thimbles in 2001 when I visited Britain and had been collecting them ever since. Whereas others may buy spoons, key chains, plates, paperweights and so on when travelling abroad, I pay for thimbles. Right, I know a thimble is a metal or plastic cap with a closed end, worn to protect your finger and push the needle in sewing. Nevertheless, what I collect are porcelain thimbles, which are practically useless but purely decorative, imprinted along with landmarks and place names.

Porcelain thimbles in the UK were first produced in the early 1800s by established ceramic manufacturers such as Royal Worcester and Wedgewood, but it was actually the souvenir thimbles to commemorate The Great Exhibition in London's Hyde Park in 1851 that initiated the fashion for collecting thimbles. The production reached its pinnacle in 1885 to 1920.

Although a wide range of subjects can be depicted on thimbles, such as wildlife, plants, vehicles, signs of the zodiac, celebrated characters, commemorated events and many more, I only seek those which feature tourist attractions, landscapes or buildings from different places. When friends and colleagues go abroad, either on business or for pleasure, all I would ask is bringing me a thimble of the place they visit.

A thimble was once considered an ideal gift for a young gent to give his adored lady in the 19th century as it would remind the lassie of her wooer when she did her needlework. However, it is quite the opposite in my case. My fiancée searches for thimbles for me when she goes abroad. Moreover, she would find out a thimble even before I start the exploration in a new place when we travel together, as she can anticipate my crestfallen face and a string of venomous words out of my mouth cursing that town or city for its failure to produce thimbles featuring its landmark (another example of my problem of personality disorder).

By the way, just as there is a word philatelists for those who collect and study postage stamps, there is also a word for us who have enthusiasm and collect thimbles, which is digitabulists. Don't tell me you've never come across know this word, because this is indeed a work though it has so far not been listed in the Oxford English Dictionary.
Posted by Wei at 09:27

I'm a collector of thimbles in Spain. I would like to exchange for thimble thimble taiwan Spain. lupitinahorno@hotmail.com

Thimbles of the World said...

Join us and write an article about your thimble collection http://thimblesoftheworld.blogspot.com/

I collect thimbles since 1984
Liz