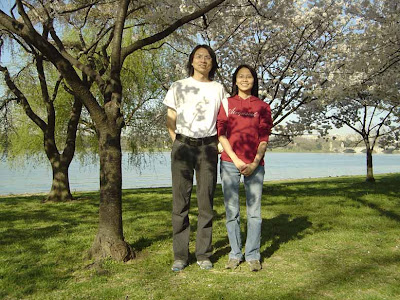 I don't really believe in astrology but sometimes I do believe that an Aries can be impetuous. The day before I returned to Stirling, I told my sister Liwen that it might be a good idea to visit Washington DC for those blooming cherry trees and, above all, buy a souvenir thimble for myself. Both pumped up, spending no time pondering this move, my sister and I took the over-night Greyhound from New York City to Washington DC at 1.30 am and arrived at 5.30 am, just before sunrise.

We were in time for the National Cherry Blossom Festival, an annual celebration from March 31st to April 15th which commemorates the gift of 3,000 cherry trees to Washington DC from Mayor of Tokyo, Ozaki Yukio (尾崎行雄, click here for details of an English translated version of his autobiography), in 1912.

Those cherry trees were presented to enhance the growing friendship between the United States and Japan, in response to which the US government also sent flowering dogwood trees as a gift to the Japanese people in 1915. However, the 'friendship' between the two countries turned sour when Japan was condemned by the US together with the League of Nations, the UK, Australia and the Netherlands, for its attacks against China. Eventually friendship became hostility after a surprise attack on the United States naval base on Pearl Harbor by the 1st Air Fleet of the Imperial Japanese Navy in 1941.

Well, long gone are the days of war. Today over a million people per year come to Washington DC for these cherries in bloom, the harbingers of spring in the capital city.

Liwen and I spent 8 hours walking around the Tidal Basin (satellite image from Google Maps), strolling on streets and avenues and, of course, looking for thimbles. We returned to New York City before sunset. 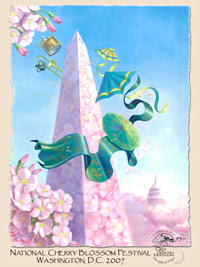 This year's poster, created by Phyllis Saroff from Annapolis, Maryland.
Posted by Wei at 00:53