Fetching a rabbit money box for the year of the rabbit 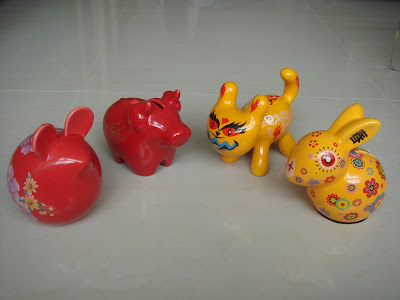 I suppose once you've started collecting something, particularly a series of cards, models or whatever collectable items, you would definitely do your best to grab all the whole series.

Shin Kong Mituskoshi, probably the biggest department store chain in Taiwan, began to issue ceramic saving banks in shapes of twelve Chinese zodiac animals, each of which would come in twelve consecutive years. The saving banks cannot be purchased straightaway; but instead, it can only be redeemed for or bought when a customer spends more than certain amount of money.

My dear wife Fanne started collecting these piggy banks in 2008, the year of the rat, and so far we have had the rat, the ox and the tiger at home. Certainly we would like to have the rabbit. However, all rabbit money boxes were gone on the first day.

Therefore, I had no alternative but tried to hunt for one over the Internet. Fortunately, as I believe, there are always people flogging whatever items they snapped up. I made a successful bit on Ruten, an auction site in Taiwan.

Now the rabbit joins the series. There are eight more to come.
Posted by Wei at 17:09