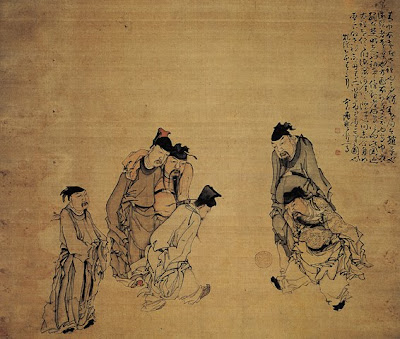 While busy marking students papers as other university colleagues would be, I manage to squeeze time out of my waking hours to read.

Last night, before taking my routine cold shower, I encounter such an interesting point given by the Irish stand-up comedian Dara Ó Briain , which came to his mind when spending an afternoon in the National Football Museum in Manchester, England.

The English didn't invent football. They codified it, which is a different thing altogether, and a less emotive thing to shout about when you next to qualify for World Cup. You didn't invent football because you didn't invent the ball, or kicking, or fields. We should only be grateful that the Victorians didn't gather together in a room and write the first rules for the use of the wheel, or fire, so that you can claim credit for that as well.

Certainly Dara offered this comment in a playful manner, but he is damn right. The English are not the first to play the ball by foot. Cuju (蹴鞠, literally 'kicking ball') had been a means of military training, as well as a recreational activity for the general public, in Ancient China during the Han Dynasty (206 BC-220 AD).

Some regard cuju as the forerunner of modern association football, of which the history spans only about 150 years. However, cuju began to decline in popularity in China during the Ming Dynasty (1368-1644) and finally replaced by football imported from the West.
Posted by Wei at 09:54

Hello Wei,
A very interesting blog, I can learn a lot about music in a "different way", and I also like your brilliant sense of humour!
I added you to my list of blogs to follow and will enjoy reading more.
DeeBee, a French in cold and rainy UK!

As you can see from the archive on the side panel, I started this blog in 2006 during my doctoral study in Scotland.

Many friends of mine had blogs but somehow their blogs gradually discontinued. I just hang in there and share some ideas or experience with unknown readers in the cyber world, and at the same time, keep writing in English.

All the best.
Wei