Another new year has arrived 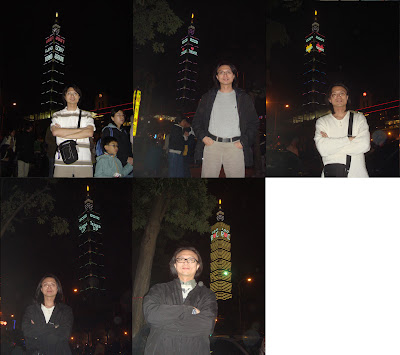 For the fifth time in a row since the year end 2006, I went to the fireworks display launched from Taipei 101 Tower last night.

Just as I have been doggedly keeping a handwritten diary for the last 20 years, so will I maintain the ritual of counting down to New Year at the same spot two blocks away from the 101 Tower and then taking a photo thereafter. As long as Blogger keeps its business, I shall upload a set of comparative photos every year.

I thought, when ushering in the new year last year, that one more member would join us a year later. However, tonight we decided to leave him in bed in the care of his grannie so that his circadian rhythm would not be interrupted.

As usual, we had another dazzling New Year's Eve, but I was really fed up with the warning weather forecast, which had been delivered incessantly in all media channels since last Monday, that a sharp plunge in temperature was to seize Taipei at New Year's Eve and people should be prepared for bitter cold, with a severe low of 5 °C.

However, the temperature was actually 9.7 °C at mid night. Unprecedentedly severe cold eve? I'm so glad the endlessly bombarding of weather warnings has stopped for now.
Posted by Wei at 13:00