How can you read all the texts on screen? 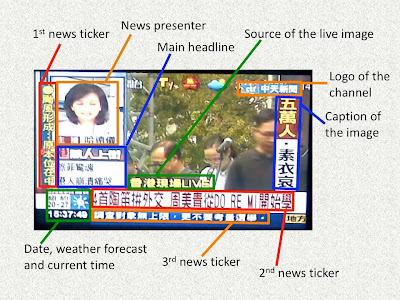 I hadn't had any opportunity to watch news channels or browse news sites over the Internet when I had been in Korea for a conference, from the 24th to 27th of August, so it was particularly touching when I saw this familiar layout of an image on a news channel this afternoon.

There are six news channels over the cable TV network in Taiwan, broadcasting 24 hours a day, 7 days week. As every channel would try its best to offer the general public all sorts of information as much as possible, apart from the news image or clip and the main caption or headline for it, there may also be up to three news tickers running at the same time, together with other information such as date, time and weather forecast on screen.

Sometimes I really wonder if all the audience members have a brilliant command of speed reading or can simply comprehend more than one message thread simultaneously.

Look at this screenshot I took this afternoon, if it was a running video clip rather than a still shot, how many block of texts would you be able to read at once?

I have no idea how a news channel look in Korea, but having left Taiwan for only four days, I really miss those Taiwanes text-overloading news channels.
Posted by Wei at 19:49