On Polaroid: feast at the end of the semester 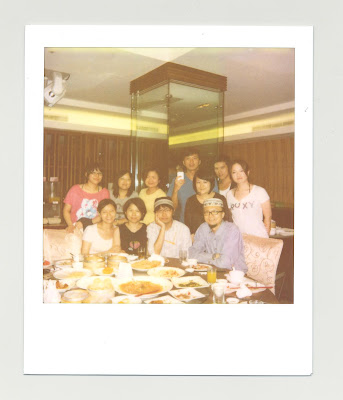 I should have posted this Polaroid photo earlier. Although compared with a digital photo, its resolution is definitely much lower, I just love its aged texture.

Since I started my full-time postdoctoral job in 2009, I have been inviting members in my database construction team to a feast at the end of every semester, and sometimes sort of fellowship dinner during the semester as well, in return for their hard work and to encourage teamwork cohesion. Most of the time, research assistants who share the same office with us would also join us.

After Ronne was born in early March, I have to go home on time every weekday to cook dinner and share child care responsibilities with Fanne, and spare the weekend for families, so no dinner event was held during the spring semester 2010.

However, I managed to gather my team members and some colleagues to have a good feed at a Cantonese restaurant on the 29th of July, about a week before I flew to Britain.

Pei-Hsiu, an alumna of our graduate institute, offered one of her last three Polaroid instant films, which have been discontinued, to capture the image of these well pleased folks. A nice shot, isn't it?
Posted by Wei at 16:05