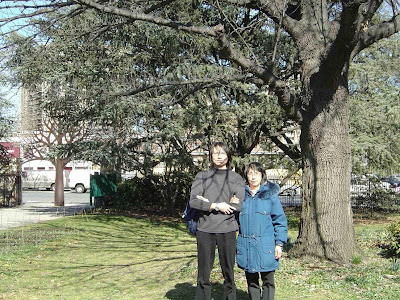 (with Mum in Queens Botanical Garden in late March 2007)

Today, the second Sunday in May, is Mother's Day in Taiwan, a holiday copied from the States. However, in the UK people have already celebrated Mother's Day 2007 on the fourth Sunday in Lent (three weeks before Easter Sunday), the 18th of March.

Mother's Day in the States is actually an imitation from the UK, advocated by Anna Jarvis. Also known as Mothering Sunday, Mother's Day in Britain has its legendary root in the 16th century Christian practice of visiting annually one's mother church, which is a church established originally as the first mission of a particular region. On this occasion, mothers would usually be reunited with their children. It is also believed that in the past all the apprentice and slaves would be allowed to leave to visit their families on this particular Sunday. Nowadays, it is a secularised holiday on which people give thanks to mothers.

Anyhow, as Taiwanese, although in Britain, I still phone my mum on the second Sunday in May rather than on the fourth Sunday in Lent to say 'Happy Mother's Day' to her. I haven't celebrate this special day with her in person since I left Taiwan for my doctoral study in 2002.

Mum unfortunately had a stroke in 2001 and then had cancer in 2005. Although all monthly medical examinations show that she is doing very well, she complains all the time that she wouldn't survive to see me awarded the degree of PhD and getting married. I've got my PhD and will get married in June, but I'm sure she will be complaining that she might not survive to see her grandchildren sooner or later. This is my mum.
Posted by Wei at 06:16