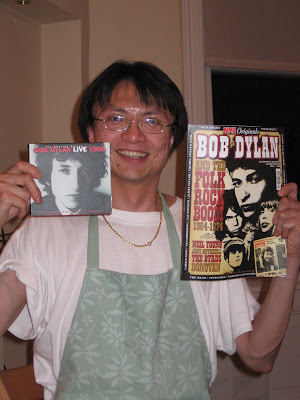 (The only official souvenir of the evening. Image ©Matt Brennan 2007)

In celebration of my successful viva voce, Matt hosted an Introducing Szu-Wei Chen to the Life and Works of Bob Dylan evening for me last Wednesday.

The idea for this evening came about on 26 November 2005, a typical Scottish soggy and dark winter day, when Matt still lived in Lyon Crescent, Bridge of Allan. I went to upgrade his operating system from OS X 10.3 to 10.4 so that he could have the fancy Dashboard and the firmware of his DVD drive so that he can watch DVDs from whatever regions.

While waiting for the completion of upgrade, I was caught by two posters next to the Beatles on the wall - a herb-smoking guy in a matted, knotted hairstyle and a pallid chap with an anaemic face and a fin de siècle air. Matt was absolutely flabbergasted when I asked him who they were. Academic in popular music studies as I am, I know nothing about Western pop beyond 1950.

Regaining consciousness after such a shock, Matt gave me a crash course in the dreadlocked Bob and reggae music, and promised that an intense course in the other Bob should be arranged on condition that I cooked an authentic, non-Britishised Chinese meal.

Here we go! Including Matt, his flatmate Caitriona and myself, nine people attended this one-evening course. Basking in the music of the pale Bob while munching my Chinese dishes, we had a very successful Dylan night.

The Dylan induction was really my first postdoctoral popular music visiting fellowship. I am so glad the folks enjoyed my food and finally I know something about Bob Dylan at the end of my doctoral study.
Posted by Wei at 04:16

Ha, Bob Dylan is great but I would easily swap him these days for a good Chinese meal. He's been ssooooo canonised in the media. I don't think there's any pop artist with a similar status to Bob. I think his latest album being hailed as best album of 2007 says more about a generation of baby-boomers holding positions of power in the music press than about the music itself. It's all about authority.