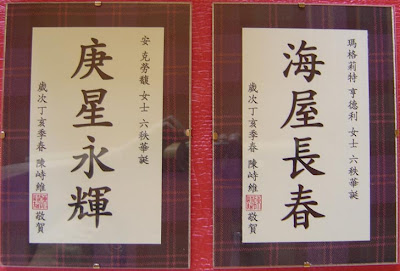 Yes, quite right, I should have been reading my thesis and started a 'mock viva court' to prepare for the worst situation in the PhD oral examination. However, I was too nervous as well as too restive to do so and instead, I have been preparing birthdays gifts for Margaret and Ann, two ladies from our church choir, the former also my volunteering wedding organiser and the latter also my wedding invitation designer and personal hairdresser in Stirling.

Interestingly, Margaret and Ann were born in the same hospital on the same day in 1948 and their mother stayed in the same ward.

As a Chinese speaker born and brought up in Taiwan, I'm so privileged to be able to learn calligraphy in orthodox Chinese characters when I was a primary school pupil. I can always produce Chinese calligraphy work for my Western friends as birthday pressies or gifts on other special occasions.

This time, two Chinese felicitating expressions were chosen to be written:While the first idiom is quite clear (an ever-gleaming birth star undoubtedly symbolise longevity), the second needs some more explanation. It has the origin in a story in which three elderly people talked about their age. One of them proudly said that he always put a stick in the house when a sea turned into an agrarian field (great change in the course of time) and he had so far gathered ten houses full of sticks. Based on this tale, the phrase 'sea house' is now used as an expression signifying longevity.

After completing the calligraphy and framing, I also spent some time wrapping them properly. I couldn't really read any single word in my thesis, so I suppose it was something worth preparing apart from my viva. 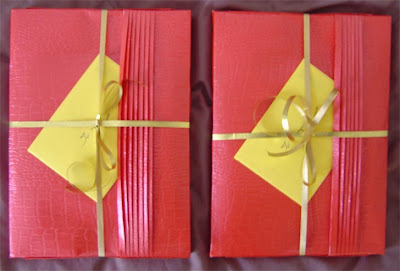 Sorry, I forgot to tell you. I am Ellen who left the first message. Ha! Finally, I can log in and post my comments.