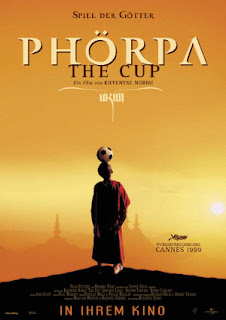 I have recently watch a film, The Cup (Phörpa), and therein heard a Mongolian song and learnt a Tibetan Buddhist lesson. While the song brought to my mind the moment I figured out how to sing like the Tuvan group Huun-Huur-Tu many years ago one morning in the toilet, the lesson reminded me of those days when I practised Tibetan Buddhism in Taiwan.

This film is based on true events in which two young Tibetan monks tried desperately and finally managed to fetch a television with a satellite dish into a remote Himalayan monastery to watch the 1998 FIFA World Cup final. It is directed by Khyentse Norbu (also known as Dzongsar Khyentse Rinpoche), a Bhutanese born Tibetan lama who was officially recognised as the third incarnation of the founder of Khyentse Lineage of Tibetan Buddhism. It is also the first-ever feature film that has been produced in Bhutan.

This film caught me from the very beginning when a piece of Mongolian overtone-singing (Hoomii) was played against the opening credits. I was quite surprised at the use of Mongolian Hoomii in a Tibetan film. Although overtone-singing can also be heard in some Tibetan Buddhist chanting, the timbre and technique are quite different from those in Hoomii.

In Mongolian Hoomii, a singer produces a constant pitched fundamental and simultaneously modulate the selected overtones, from the 4th harmonic till the 16th, to create a formantic melody. However, in Tibetan Buddhist chanting, for example, the prayers recited by monks at the Gyuto Tantric University, there is a much lower fundamental, as low as 70Hz, and more simultaneous notes, and the 10th harmonic is especially made louder than other overtones.

Anyway, it doesn't matter. The lively and delightful Mongolian song is definitely more suitable for the opening of this light-hearted film than a sonorous and solemn Buddhist prayer.

Apart from the Mongolian song at the opening and the hilarious plot developing throughout the film, I was engrossed by the teaching of the abbot of the monastery at the end of the film.

Just before the ending credits, the abbot Lama Chonjor, lectured to the young monks

Likewise, just as space is limitless, so are enemies omnipresent. It is impossible to overcome all enemies, yet once one overcome hatred, he also practically overcome all the enemies, all the discontent in this world and all the fears and sufferings created by ego-consciousness.
...

Simple as it is in principle, I would say it is difficult in practice. I'm not ready in properly fitted shoes and just can't cheer up when seeing problems unsolved. There is much more for me to be learnt and practised in all aspects of life.
Posted by Wei at 02:38

Thank you, Wei. Got the lovely cake and your warm regards. Can't help smiling at my PC monitor cause chestnut is one of my favorite flavors with cake.

I will play the song you wrote me last year tonight as the last glance on my ever-cherished 29. I am sure it'll still bring me all the sweet feelings that I had when I first heard it.

Really nice of you~