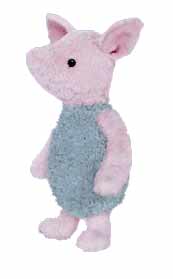 Chinese New Year has just arrived and I'm so glad that I submitted my thesis the day before New Year's Eve. As a matter of the Chinese tradition, all work should be done by the New Year's Eve so that we can have a brand new start.

It used to be a custom that a creditor had to collect debts by the end day of the year, otherwise all the debts would be written off automatically when New Year came.

2007 is Year of Pig according to the Chinese zodiac. I've found a series of pigs in some different languages. Have a look and see how many of them you read.

Year of Pig reminds me of an unforgettable holiday with my fiancée in 2002, the year I finished national service. We visited East Grinstead (in Sussex) and spent a day in Hartfiled Village where A.A.Milne created the most celebrated Winnie-the-Pooh in the 1920s.

In the High Street of the village, I found The Pooh Corner Shop, which housed the world's largest selection of Winnie-the-Pooh products. Since one of my fiancée's nicknames was piggy, I bought her a piglet soft toy, the classic one not the awful Disney spin-off.

According to the colour illustrations by Ernest H. Shepard in the Winnie-the-Pooh books, Piglet had white skin and wore a green jumper. However, it was turned into a pink piggy in a darker-pink jumper in Disney cartoon. I don't like it.

Anyway, hope Year of Pig is a prosperous year.

PS. It didn't snow at all in Stirling when I was away in Taiwan, but strangely enough, it snowed a couple of days later after I came back. Since a Chinese phrase goes that 'heavy snow anticipates a prosperous year' (Ruixue zhao fengnian 瑞雪兆豐年), the snowfall which welcomed my return to Scotland seems to be a good omen.
Posted by Wei at 00:07