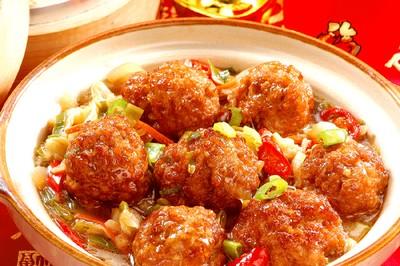 In response to Pedro's comment on my previous post, I'm now offering more details on Braised Lionhead, one of my speciality dishes.

Lionhead (shizitou 獅子頭) is a Chinese Huaiyang (淮揚) dish consisting of jumbo meatballs stewed with vegetables and originating from the native cooking styles of the region surrounding the lower reaches of the Huai and Yangtze Rivers. There are actually two varieties of this dish, the steamed and the braised. In the former the meatballs are usually steamed with Chinese cabbage and in the later cooked with Chinese cabbage and bamboo shoots in soya sauce.

Being named so is because the look of a meatball surrounded by a Chinese cabbage leaf really resembles to a lion's head. (Pedro, use your imagination!)

I don't really know how to prepare the steamed, but I shall contribute my recipe of the braised.Right, Pedro, now you can cook one of Wei's specialities for yourself.
Posted by Wei at 16:31

Oh Wei, I do miss you! Very much enjoyed Brocolli's Sorrow, did I ever give you any of my stuff (i.e. 'music', not brassica)? If not, let me know your snail mail address and I'll send some out to you. Will try the lionheads over the coming week - particularly looking forward to throwing them at the chopping board. The closest I've come to a blog can be found on the Gothic Imagination website (on werewolves, the uncanny nature of puberty and film music). If you have 6 hours to spare (I wrote too much, as usual) just google Gothic Imagination and click the guest blog link, my name's there somewhere). Hope you are well, and to hear from you soon. And what are you working on just now?
mark xx