A couplet for Edwin's new studio 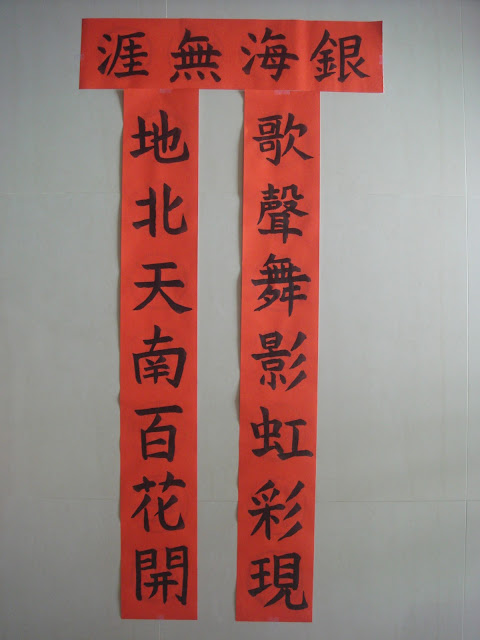 So many people believe that regular exercise is an important part of a balanced stress management programme and are willing to pay high membership prices to join gyms, health clubs or yoga classes in hopes that nervous tension arising from the fast pace of life in the industrial and metropolitan environments could be antidoted by shaking their bodies in a well organised fashion.

I totally agree with it.  I ran three miles both in the morning and in the late afternoon everyday when I was under extreme pressure during the final days of thesis writing in Scotland.  However, I opt for Chinese calligraphy.

Chinese calligraphy requires deliberate mental design and concentration on guiding the soft writing brush.  Both strength and agility are essential for fine artwork.  Therefore, I believe composing couplets and practising writing Chinese characters is a good way to extricate me from academic abyss.

Apart from writing new year couplets at , I compose couplets and write them with a Chinese writing brush for friends on various occasions, such as weddings, birthdays, graduations and etc.

Edwin, a director, producer and historian, has recently started his own studio, light-heartedly named 'Golden Haze Arts and Culture Heath Center', in Taipei.  To celebrate the formal establishment of this 'Health Center', I produce this, roughly translated as

The couplet also comes with a banner:  What an immense cinematic world! (銀海無涯).

I wish him all the best and look forward to producing more interesting audio-visual, theatrical or whatever works with him in the near future.