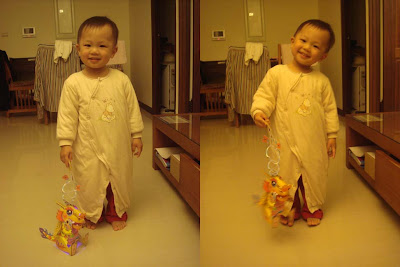 (Ronne and the dragon)

Surely there are a lot to be noted down during the long vacation, but the only thing I am able to write about on the day before the new semester kicks off would be Ronne and his dragon lantern.

This year the lantern festival, which is generally regarded as the last day of the Chinese New Year and after which all lunar new year celebrations conclude, fell on 6 February. Although we didn't visit any lantern fair, lantern parade, garden party or something like that, we celebrated the festival at home.

A friend of Fanne gave us a DIY lantern set. We (of course 'we' on this occasion is a singular which denotes 'I') managed to assemble the cardboard dragon lantern and we (now this is a plural pronoun which indeed means the whole family) had a good time in the evening. 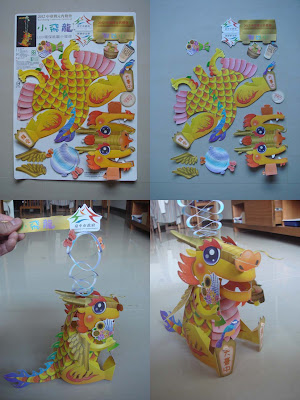 As we failed to take proper, sharp images in the dark with our old digital camera, probably manufactured before you bought yours, what are uploaded here were taken during the day.
Posted by Wei at 14:27