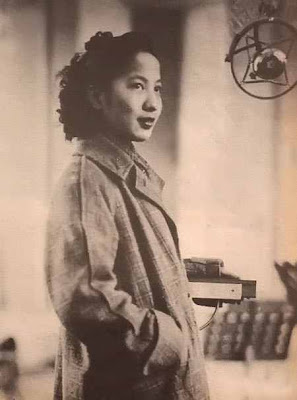 
(Listen to the Mandarin version of 'San Francisco' interpreted by Martha Su, on Regal (China) 41487B. Yes, it's in Mandarin Chinese. Can you identify any word?)

To usher in the new semester, I was reorganising all the files and folders on my MacBook Pro this afternoon. I found this long-lost 'San Francisco', a song adapted from the theme of the 1936 Academy Award winning San Francisco, set in San Francisco before and after the 1906 San Francisco earthquake. (Thanks to Edwin W Chen's information about the film.)

This song, now one of the two official city songs of San Francisco, was originally sung by the leading actress Jeanette MacDonal in the film, for six times at six scenes respectively.

I don't know much about Martha Su, the Chinese singer who covered 'San Francisco'. The Mandarin 'San Francisco' is one of the only two songs known so far she had ever recorded.

Martha's scat improvisation in this song is fascinating and unprecedented, as well as unparalleled in the 1930s and 1940s Mandarin pop scene. I can't think of any other singer from the same period that could improvise with wordless vocables or nonsense syllables to create the equivalent of an instrumental solo like Martha.

Make a comparison between Martha's recording and one of Jeanette's performances in the film embedded below.