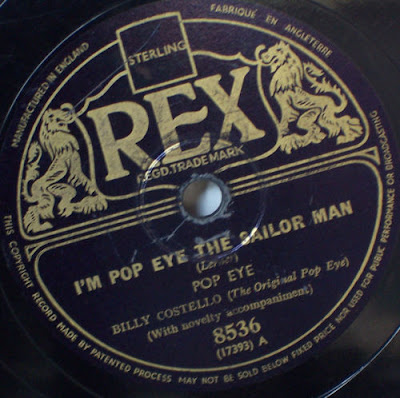 (Listen to 'I'm Popeye the Sailor Man' by Billy Costello, the original voice of Popeye in animated cartoons)

Like many cartoons, such as Snoopy and Dennis the Menace, Popeye is a character originally created for a comic strip which is later adapted into an animated cartoon.

I can't remember if I've read any Popeye newspaper comic strips or individual comic books in my childhood, but I am sure I'v watched tonnes of Popeye animated cartoons on TV.

On TV Popeye always turned many hopeless situations around after gulping some spinach from a tin, which boosted his muscles and physical strength immediately. Therefore Popeye was taken as a healthy eating role model by parents to encourage vegetable-phobic (is there such a word?) children to eat more spinach.

I actually came to know this record through a radio programmed in an old newspaper circulated in Taiwan back in 1936. This record was once played over the air in Taiwan.

I was so amazed how producers at the then Taipei Radio Station (台北放送局, call sign JFAK) would collect and introduce music from the West, not only 'classical' works but also other popular tunes, to the audience in Taiwan. I then discover this record on eBay, bid and won.
Posted by Wei at 10:17