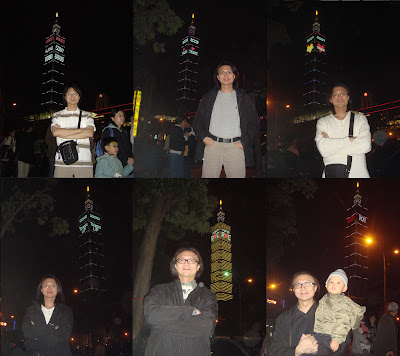 The Chinese New Year of the Dragon falls on the 23rd of January in 2012. Before running towards a whole series of traditional rituals, I am obliged to herald the Gregorian New Year with thousands of revellers on streets.

For the sixth time in a row since the year end 2006, I went to the Taipei 101 fireworks show again last night, with my wife of course and, as I had spoken last year, my son, who is old enough now to join us.

While I am busy marking students' essays, striving to finish the manuscript of a paper which is scheduled to be published by the end of January, blah, blah, blah, I insist on maintaining the ritual of counting down to New Year at the same spot and then taking a photo thereafter.

I am so glad that Blogger is still in business and I am able to upload a set of comparative photos this year.
Posted by Wei at 01:19