A Rubik's Cube that never makes us frustrated 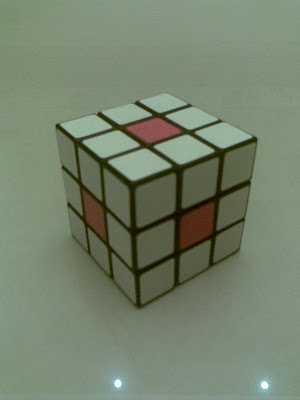 Ever got frustrated with a Rubik's Cube? Now there is an alternative version that never lets us down.

From time to time I see news clips on TV showing how some people can
solve Rubik's Cubes in an amazing way. How can some nerds solve this mechanical puzzle in one minute, even solve it with their feet or while blindfolded?

These video clips always leave me totally flabbergasted, for I can't even solve this bloody puzzle with my eyes wide open in one hour.

Fortunately, there is a self-solving Rubik's Cube which requires no effort to solve. It has been solved in the beginning. 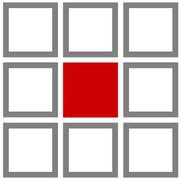 Well, actually it's a 3D logo of the Second Northern Taiwan Teaching Resource Centre.
The idea behind this logo comes from the well-field system, a and distribution method existing roughly between the 9th to 2nd century BC.

A square area of land was divided equally into nine sections, with the outer eight cultivated by eight individual peasant families and the centre jointly cultivated for the landowning aristocrat.

Whatever idea there is behind the design, the 3D version is absolutely great consolation for people like me who cannot solve a six-coloured cube.
Posted by Wei at 19:59